A galaxy far, far away 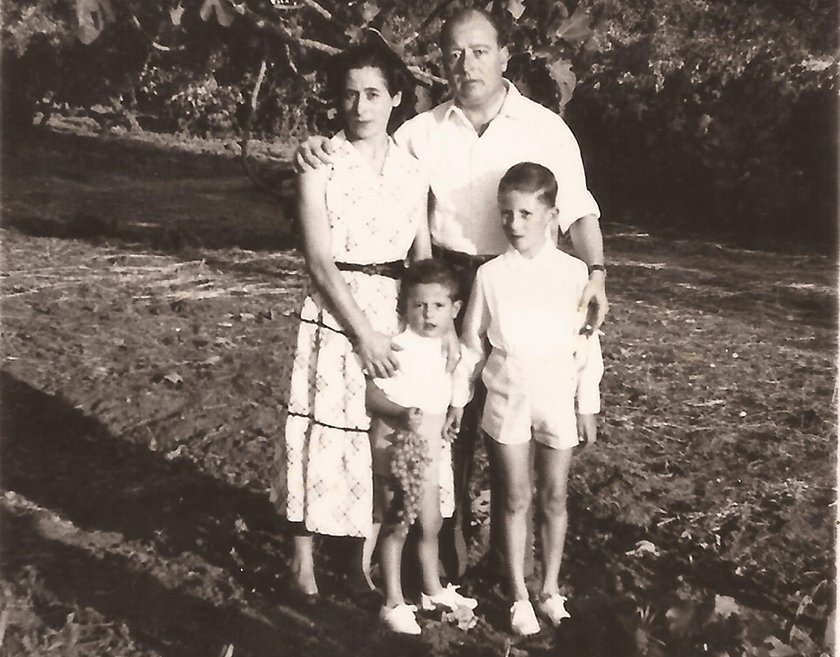 The author with his parents and younger brother in the 1950s.
J

uly was the month. I used to wait for it, yearn for it, dream and daydream of it. July was the time of real vacation, the heart of any school’s summer holidays. It was the month my father took us to the countryside for a four-week holiday, la villeggiatura, as Italians used to refer to it, deriving the word from the Latin villa, a farmstead or a house in the country.

And a real “villa” it was, for the place was a 19th-century two-storey mansion, quite decrepit and certainly uninhabitable. It had been long neglected owing to inheritance litigation and had been brutally vandalized over the decades.

During the war the villa had been used to house Allied soldiers as they pushed northward, which had not improved its condition. But the servants’ quarters, in a nearby dépendance, a single story outbuilding with several large rooms, had been continuously used by the peasants working on the land of the estate, and therefore preserved in fairly good shape. The peasants no longer lived there, but in summer the land manager had the rooms whitewashed and rented to the villeggianti, families of the nearby town folk who could enjoy a one-month holiday at a modest price.

The rooms were unfurnished. One was fitted out as a Spartan kitchen, with a gas burner, a couple of cupboards, a table and a few chairs. So we had to bring our own things: mattresses, bedding, plates, cutlery, glasses, pots and pans, kerosene lamps and candles, since there was no electricity. We also brought a generous provision of pasta and tomato sauce, a couple of demijohns of wine, because visits by friends and relatives were not infrequent. We would buy fruit and vegetables directly from the peasants, but delicious figs were freely available from dozens of shady trees all around. Fresh bread was on sale at a small store about half a mile away. 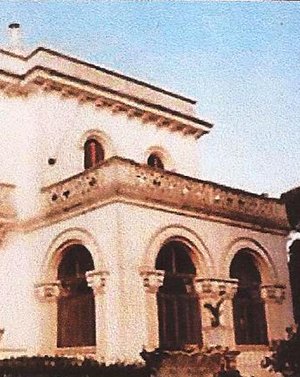 A view of a part of the villa in its heyday.

Mother would often make homemade pasta, using the freshly picked red tomatoes and a bunch of basil for the sauce.

Water was supplied by a 10-meter deep draw-well with a fine wellhead. A pulley was suspended between the two artistic pillars, with two 10-liter tin buckets hanging at both ends of a long rope. I loved maneuvering the rope, with one empty bucket going down squeaking while the other came up brimming with deliciously chilled water.

My father would then lower another capacious bucket in the well, containing a watermelon or, more often, a couple of bottles of wine.

The place was about four or five kilometers from Alezio, my native village at the very heel of the Italian boot. Still, getting there with our household belongings was not that easy in a time when motor vehicles were still a rarity (the late 1950s), especially in this part of the country.

In my village, only a few professionals and wealthier families owned cars. More common were scooters, Vespas, Lambrettas, Apes, mopeds, and motorcycles (mainly Moto Guzzi and Ducati, with the occasional roaring Gilera). A few small trucks were rented by farmers to fetch the harvest and bring it to the market, or olives and grapes to the presses. Yet most farmers still relied on heavy and monumental horse-drawn carts, the traini with huge wooden wheels, similar to those used in Sicily, or on scialabà, a lighter cart, with smaller wheels and side seats, the term being a corruption of the French char à bancs.

Gigs would often elegantly race on the dirt roads pulled by slender thoroughbreds. My family did not own any means of transport, with the exception of a couple of bicycles.

We had to bring our own things: mattresses, bedding, plates, cutlery, glasses, pots and pans, kerosene lamps and candles.

On the day of our departure, very early in the morning, a cousin of my father’s would arrive on his cart drawn by an imposing and powerful Frisian horse, to carry me, my mother, my younger brother, still little more than a toddler, my father’s youngest sister (who lived with us, since both my grandparents had died when she was in her teens), and all our things to the countryside. My father would lead the way on a bike.

On the first of these holidays that I can remember, we found a little dog on our arrival. Its name was Pronto (“ready”), the land manager told me. It was a small playful black mongrel, with a white stripe, like a tie, running down its chest.Faithful to its name, Pronto soon became an inseparable companion in my excursions to the nearby fields and the vast park around the villa. The park had actually turned into an overgrown wood of tall stone pines, oaks, mastic trees, in a convolution of creepers. It was crossed by a few paths, all leading to the stately, solitary and dilapidated mansion, the terminus of my morning wanderings.

The rooms were large and the high vaults were frescoed. The walls preserved traces of the original wallpaper. A majestic staircase led to the upper floor. Doors and windows had been pillaged long before and so were many of the marble slabs of the staircase steps. Lizards scampered everywhere and birds darted through the empty rooms.

It was my castle and I a solitary prince, with Pronto my equerry. I would often lie in the shade of the pines, looking at the sky through the tangle of the branches of the wide green umbrella, breathing the air scented with the smell of fig trees and the balminess of resin. Pronto lay beside me, licking my face from time to time.

On Sunday morning, my mother would wake me up at 6 a.m. and we would walk a few hundred meters to the convent of the Carmelite Nuns of St. Therese of the Child Jesus for an early mass. The convent was on a gentle hillock, among the olive groves and the vineyards. The nuns would sing hymns behind a grating during the celebration.

Sometimes someone would bring a guitar or a mandolin and they would sing folk and pop songs.

In the evenings, family friends or relatives would often arrive, walking from nearby houses, or riding bicycles or sputtering motorbikes. I looked forward to the visit of my aunt’s fiancé. On the evenings he was expected for dinner, I would wait for him at the end of the path leading to our dwelling and would run to meet him as soon as the headlight of his creamy Laverda 75 would appear, turning from the main road. He would stop and wait for me to mount on the back seat and ride with him the remaining few dozen meters.

After dinner I would go to bed in a dark room, but the feeble light of a kerosene lamp burning on a table outside peeped in through the window, while my parents and their guests enjoyed the fresh night air, remembering episodes from their younger days or telling stories of wartime days. Sometimes someone would bring a guitar or a mandolin and they would sing folk and pop songs. Their voices were my lullaby. Pronto slept peacefully at my feet.

For three or four more years we continued the tradition of the villeggiatura in campagna and every time, on our arrival, Pronto was there, ready to play, barking and running around, mad with joy. On the last of these occasions, Pronto did not appear. I looked around in vain. Seeing my puzzled look, my father asked the land manager: Pronto had died during the winter.

In a way, that moment marked the end of my childhood, the sad epiphany that life had an end, and for months I was haunted by the thought that my parents would disappear too, like my grandparents had, years before I was born. I was glad we never went back on holiday to that place. At home, in homage to Pronto, I began taking in stray dogs, and still do.

But in my adulthood, and particularly in the hot months, I am sometimes overrun by nostalgia for those sunny mornings in the wild, those starry evenings and the voices droning outside my room, in the golden light of the lamp, a firefly in an ocean of dark.