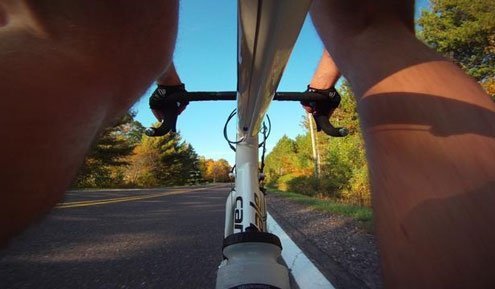 Traveling, yes, but only on a bike.
I

n 2010, I moved back in with my parents. I was 25 then, which sounds young to me in retrospect but at the time seemed too old to continue my transient backpacker-abroad life. I found a job, invested in an aluminum-frame 1987 Peugeot Comete, and began brainstorming what I called my “Astonishingly Adulty Five-Year Plan.”

It involved starting a savings account, putting money in my Roth IRA, studying for the Graduate Record Exam, and above all keeping my feet firmly planted. Since college graduation, I’d not been able to save more than $1,000 without spending it on a plane ticket. Gradually, though, I began to see the plane tickets as a sort of escape, into adventure, yes, but also away from a vision of adulthood that frightened me.

Adulthood still frightens me. In grocery stores I see the harried mothers with eyes that scream for reprieve and rescue. On public transportation I see young businessmen with tired paunches. Beside them are the sensible, dowdy pumps of my professional twenty-something counterparts. I see living rooms pulled directly from the Decor aisle at Target that match up with long Netflix evenings and the occasional neighborhood BBQ.

But the future comes, whether we want it or not, so I decided to stare it in the face and take a tiny stab at growing up.

Part of the psychological pull to slow down, to stop flying off, was the recognition of life passing. For 25 years, I’d been getting older, but not old. My parents and brother had been changing, but not aging.

Then, I went home found my uncle weak from pneumonia. My dad had arthritis. My brother’s hair was salted with gray. My girlfriend’s once-newborn daughter Caoimhe could now walk and tell stories and say my name — a name she didn’t remember until her mother reminded her I was a “very important person.” Her eyes flickered with doubt. “Hi, Aunt Julie,” she said in a stubborn pout.

No VIP, I moved home.

I hiked and canoed on long weekends with my uncles. They taught me to tie knots, to build a fire, to listen for birdcalls. I biked to my brother’s and sister-in-law’s house once a week for our “Wednesday Friendsday.” We ate together, told stories, called our cousins, sat on the porch drinking wine and watching fireflies. I made dinner with my parents and watched “Jeopardy” while eating. They were still proud of me when I knew the answers. I returned to my old ballet academy, to my old Thursday-evening class, and my beloved teacher.

Once a week, I biked 10 miles down long, flat stretches of mid-Michigan farm lanes to my aunt’s quilting group. I spent the afternoon with five retired ladies and we cut, sewed, and chatted. I felt doubly “adulty,” since I was getting quality time with my aunt while acquiring sewing and quilting skills. My first quilt was a Batman quilt, of which I was infinitely proud. I felt crafty, motherly and capable. But it also felt a little childish — a quilt for the selfish little girl in me who had worked hard to amuse herself. The true mothers in the group knitted gifts for friends, children, and grandchildren.

Yet my spending habits had changed. I went to the store and rummaged through fabrics: lilac butterfly, creamy glitter, and watercolor pastel. Some of the money I would once have spent on a plane ticket I used instead for extravagant batiks and thick cotton batting. I found myself happily settled in for the rest of the bike-driven summer.

Yes, I did end up buying a plane ticket in the end. I flew to Brazil in the fall and didn’t make my way back home until mid-May. But I again spent that summer at home, picking up my old routines. One day I borrowed my mom’s car and went back to see my girlfriend and Caoimhe, hoping this time she’d remember me. It was the afternoon before I left when I lay down with her to encourage her to take a nap while her mom read us a story. A summer breeze swept through the farmhouse but the air was still unbearably sticky and hot. Caoimhe, still shy, lifted up the bedspread and covered me.

I waited until she wasn’t looking and uncovered myself. She covered me again. I kicked it off yet again when I thought she was asleep. She opened her eyes, apparently still listening to the story, grabbed the blanket, and this time covered me with it decisively. She looked at me intensely, not wanting to interrupt her mother’s reading, but trying to convey something.

I looked down and saw I was covered in my quilt. She had remembered me. Maybe only as “the lady who gave her blanket,” but that, I thought to myself, was a first step.