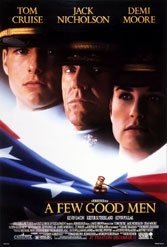 Based on the Aaron Sorkin play “Men,” Rob Reiner’s military drama has no doubts about good guys and bad. Two Marines are charged with murder in a Guantanamo Bay hazing incident. A lazy, softball-first prosecutor named Keefe (Tom Cruise) draws the case because the military wants a whitewash. Enter a pretty commander who outranks him (Demi Moore; whose character was a man in the Sorkin play). She and her colleagues raise doubts, getting Keefe to wake up by the time the case goes to trial.

All this may be beside the point, since the base commander is one Col. Nathan Jessep, a simmering, bad-to-the-bone Jack Nicholson. The homicide investigation and coverup acts as an appetizer to the coming Keefe-Jessep showdown, which is the film’s spectacular if predictable climax.

Reiner gets the best from major and minor players, which isn’t hard give the tight focus and the overall talent level (Moore does her best to elude cliché). Keefe’s courtroom goading of Jessep eventually produces a membrane-busting response, a memorable snapshot of authority under siege and Nicholson at his best.