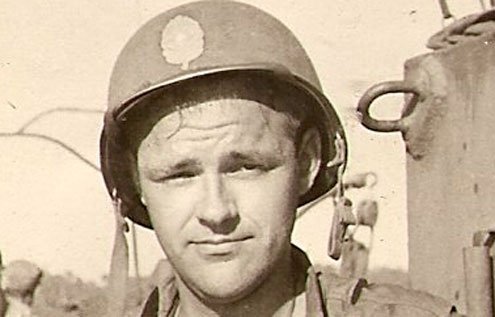 The author's father pictured on Morotai Island, near Indonesia, before the U.S. attack on Japanese-held Borneo in April 1945.
Y

es, yes, I know that I missed the deadline for reflections about my father. But as I reflect on the current “campus rape crisis” and wonder how to discuss it with my two college-age children, my father’s words keep coming back to me.

Dad was an old-fashioned doctor whose patients loved him because he listened to them. He enjoyed absorbing long medical histories, which no one has time for today, not only because they were medical necessity, but because he loved a great story and patients provided an unending supply.

But empathy and his renowned gentle surgical touch did not make Dad a softy. He lived through the Depression as well as his father’s serial bankruptcies and extra-marital affairs. He spent World War II as a U.S. Navy medical officer on a vessel in the Pacific. He was an intern at Chicago’s public Cook County Hospital — the Bellevue of the Midwest — and delivered babies in Chicago’s slums. Following the war, he was the venereal disease inspector for the Great Lakes Ninth Naval District.

So Dad knew a lot about the rough side of human sexuality. His love of storytelling meant he was not shy about sharing. Over family dinners we learned about the strange things ER doctors find in orifices. A prison warden patient was an excuse for a discussion of jailhouse relationships. While the two of us did the dishes (we did every night), Dad explained the surgery involved in sex change operations.

With the stories came views about sex and men he felt my sister and I needed to hear.

Dad warned us that male sexuality was not like the female kind. He loved the Rogers and Hammerstein musical “South Pacific,” but knew the song “There is Nothing Like a Dame” was a cute and euphemistic way of shielding a force that could be single-minded and brutal. It might have sounded like “Guys are only after one thing,” but Dad’s view was more nuanced. Nor was he cynical or moralistic about it. In his eyes, male sexuality just was the way it was, the way biology just is.

Today, biological imperatives such as eating and sex have become branches of the entertainment industry. Their ugly side makes us anxious and we fear that recognizing it is synonymous with approval. It isn’t, as my dog, whose chipmunk hunts I invariably thwart, will tell you. In fact, my father never tired of repeating, “It is reverence that must be taught, day and night, if boys are to be anything but apes,” a quotation whose source is now lost.

At the same time, my father begged my sister and me to be patient and kind to young men. Boys were confused, awkward and counterintuitive, he told us. They did dumb things to girls they liked; pushing them down on the playground, driving too fast or festooning your house with toilet paper were compliments. But most of all, boys were scared of girls, who seemed self-possessed and mature. Accustomed to the male world of hard, fast and loud, boys were map-less in the trackless desert of girls, which was filled with scary sentimental booby-traps. Kindness did not mean weak or girly. Dad made sure we spoke our minds — and knew how to change a tire.

Kindness wasn’t simply about empathy; it was also about respect and reciprocity. There was respect for the delicate sentiments accompanying both male and female sexual desire. And there was reciprocity for kindness. Dad believed in “nice girls” and “acting like a gentleman.” Were these merely the empty social conventions of a patriarchy? Maybe, but they were also clear guides for unambiguous messages and behavioral maps for tricky terrain.

I remember he once said he was glad that he had begun dating before the sexual revolution. “I was so afraid that I might mess up just trying to kiss a girl. Thank goodness I wasn’t expected to ‘perform’ anything more.” Sure, my father was from another generation, one for whom casual bigotry was acceptable and double standards the norm. But as I watch this generation confront the challenges and conflicts of sexual desire, love and long-lasting relationships, I see what my father meant. It has only gotten worse since my father said that. With even more media exposure to unrealistic ideas about the standards of what sex should be, fear of failure or awkwardness seems to have risen to a destructive level. Dad’s word for a sexually successful man was “suave.” Overcoming fear meant learning the art of being pleasing and persuasive and of having good manners, not procuring Rohypnol.

My final thought comes via my sister rather than father. During a tour of the FBI headquarters in the early 1960s, my sister — precociously articulate — interrupted the young agent who was our guide. “Exactly what is rape?” she asked. The others in the group cringed, but the agent quickly answered, “Rape is a violent sexual assault.”

I have never forgotten this. Sex you wish you hadn’t had, sex you don’t remember happily or sex you don’t remember at all — especially if alcohol is involved — is regrettable. Life is full of regrettable decisions and you never stop making them. They are something to take responsibility for, learn from and move on. Regrettable decisions are the grit that transforms stones into gems.