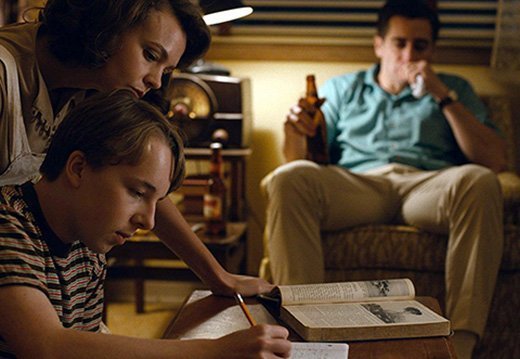 he strength of Paul Dano’s directing debut, “Wildlife,” based on the eponymous 1990 novel by one of America’s best novelists, Richard Ford, is that it has not one, but three protagonists, each with a compelling story and perspective.

Joe (Ed Oxenbould), the 14-year-old son, is the narrator, and “Wildlife” (both the book and the film) has been called a “coming-of-age” tale. It’s not primarily that, but it’s Joe’s point of view, to be sure. The camera is frequently focused on him, sometimes as he only overhears his parents’ conversations in the next room.

The opening scene is idyllic: Joe and his father, Jerry (a sensitive, volatile Jake Gyllenhaal), playing football in the yard of a middle-class home. That idyll will soon be punctured by Jerry’s termination from his job as an assistant golf pro in the Montana town to which the family has recently moved in search of a better life.

Set in the early 1960s (President John F. Kennedy is on the radio), the family’s life unfolds in a pre-feminist, industrial era, written with Ford’s knowledge of what happened to the nuclear family and the American economy in the decades to come.

Joe’s mother, Jeanette (Carrie Mulligan), has the look of a competent, devoted homemaker, of the type Betty Friedan critiqued in “The Feminine Mystique” (1963), and she seems to want to play that role – as long as her husband Jerry plays his.

The family’s existence is precarious. Jeanette complains about rich people (i.e. the golf club members) wanting to keep poorer ones down. Jerry, a proud male, refuses to take “teen jobs,” like working at a grocery store. Joe is left alone on the bench during football practices at his new school (one of the more heavy-handed scenes). Jeanette, though having been a substitute teacher in Idaho before they left for Montana, finds only a small amount of work as a part-time swim instructor, and she eventually turns to an older man with ostentatious wealth (Bill Camp as Warren Miller). Family dinners go from elaborate Betty Crocker meals to canned food to eating out of cans.

After his firing and his frustratingly unsuccessful job hunt (in part because he doesn’t make the effort), Jerry joins a group of down-on-their-luck men looking to earn money fighting a ferocious and uncontrolled wild fire that threatens the area. Jeanette and Joe see his actions as an abandonment of the family. For Jerry, this is not just about money; rather, fire-fighting is man’s work, a chance to redeem himself from his failures. He is a harbinger of the unemployed, or underemployed, white male of today’s middle America.

Much of the film is Jeanette talking to Joe, sometimes treating him as a confidante, other times stating that he doesn’t know

Paul Dano’s directing debut, ‘Wildlife,’ reaches back to the 1990 Richard Ford novel of the same name.

anything. But the 14-year-old, a reserved and usually silent boy, can hardly function as a therapist for the frustrated mother and wife. The early 1960s setting allows Joe a credible naiveté that would be incongruous only a few years later. In a diner scene, Jeanette tells her son she doesn’t like her name. “It’s a waitress’s name,” she says, expressing her ambition to rise above her class. She and Jerry named their son “Joe,” she tells him, because it was plain and he could be anything he wanted to be. The themes of upward mobility, class, and identity pulse through the film and through every character. The couple is too young to be in mid-life crisis. They just cannot find their footing.

The acting in “Wildlife” is excellent, as one might expect from Gyllenhaal and Mulligan. The couple’s arguments seem all-too-real, and approach in intensity those of the couple in “Blue Valentine” and of Dano as the opportunistic priest Eli Sunday in 2007’s “There Will Be Blood.”

Nothing catastrophic happens in “Wildlife,” in spite of the raging fire and another incident that could literally blow up the characters and the plot. Dano, whose directing has earned him many award nominations, uses Ford’s impeccable sense of the struggling middle class and lets the characters reveal the desperation of a man, a woman, and a family, coming apart.