A dress and a friendship 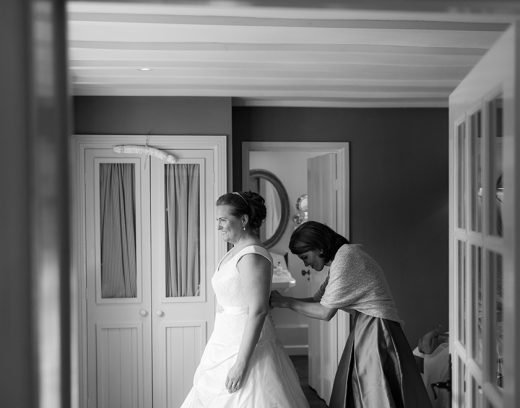 Above and below, the author with her friend Jyl on the latter's wedding day. Photos by Thomas Humphries.
E

very year when I clean out my closet, I think about giving away a green dress that I bought one summer in Umbria.

My friend Jyl was visiting me from the States at the time, and were together to the Spoleto Festival. One afternoon, we wandered into a boutique where I spotted the dress right away. It was a beautiful Kelly green, with colorful flowery stitching and a red border. I was smitten, but it was expensive.

“I think you should get it,” Jyl told me. I quickly came up with an excuse: my brother’s wedding was coming up in the fall, and I’d need something to wear to the rehearsal dinner.

I snatched it and never looked back. That was 13 years ago, and I’ve worn the dress maybe a dozen times since. The green has faded to olive; the red has deepened to Bordeaux. Although it’s already been a few years since I last wore it, I can’t seem to part with it.

I notice it as it hangs in my closet along with an Italian merino wool royal blue sweater that belonged to my Italian ex-boyfriend, which I also never wear, especially now that I live in humid Florida.

Over 13 years, the green has faded to olive; the red has deepened to Bordeaux.

I’m a firm believer in decluttering à la Marie Kondo, but some things are permanent fixtures. The dress is a relic, a reminder of the chapter of my life I’ve dubbed “My Roman Girlhood.” That was the decade in which I fulfilled my adolescent yearnings and shepherded me toward adulthood.

It’s also contained a good friendship. Jyl and I met in high school orchestra, and we first became close at the All-State orchestra competition senior year. One night, we left the group dinner to check out the hotel restaurant, ordering food that at the time seemed exotic, like spanakopita and various cheeses and chocolate. We laughed and gossiped, forging the bonds of our friendship.

Though we went to the same college, we drifted apart. Our ties were revived only when I bumped into Jyl’s mother at our hometown library one summer. Jyl visited me twice while I lived in Italy. The first time was our Umbria “dress” trip, the second a visit to the Amalfi Coast.

Our thirties were just beginning, so we had plenty to plan for. Neither of us was in relationships that would last, and we enjoyed dinners that with men would have been seen as romantic, sharing bottles of wine and desserts as if we were in fact a couple.

Jyl’s visits were also validating. Italy did for me what college does for many: it opened me up, challenged me, inspired me, disappointed and delighted me. I came — recklessly, yet freely—into my own. Jyl saw a better version of me.

My thirties would later hit me hard. I returned to America, lost my mother, longed for a companion, carved out a career in an industry in crisis, and took to becoming a writer. Par for the course, perhaps, in growing up, but my struggles felt uniquely mine.

I also missed Italy, only in hindsight understanding the appeal of its humanist, compassionate culture —even when compared to American generosity.

My friendship with Jyl helped sustain me through that turbulent decade. We’d meet a couple times a year, traveling, shopping and eating nice dinners. As a businesswoman, she’d pick the fancy restaurants with good wine, and urge me to buy nice shoes and take risks in life.

I, in turn, would find the hole-in-the-wall eateries with memorable food, my ear serving as comfort food. We’d talk for hours about the lives each of us wanted. Our gatherings were always fun, freeing and heartwarming.

The decade would end sweetly, if differently, for us both. A few weeks before her 40th birthday, Jyl got married in England, where she now lives happily in both her family and career. I was her bridesmaid, and flew in from a poetry class at the Iowa Writers Workshop. My companion joined me, and a year later, I was pregnant.

We’d grown up —differently but somehow, together.