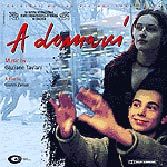 A gem in the rough from director Gianni Zanasi. Teen brother and sister Andrea and Stefania sneak from their parents’ apartment near Modena to take on the big city represented by the Bologna auto show. Little brother Andrea is a shy but mischievous dreamer (in Bologna, he masquerades as the son of a Ferrari mechanic); Stefania thinks she’s mature but isn’t. They quarrel as siblings do.

Their Bologna excursion amid cars and strangers makes for a charming and eccentric coming-of-age movie that operates outside the paradigms of Italian political filmmaking.