A day under the Tuscan sun 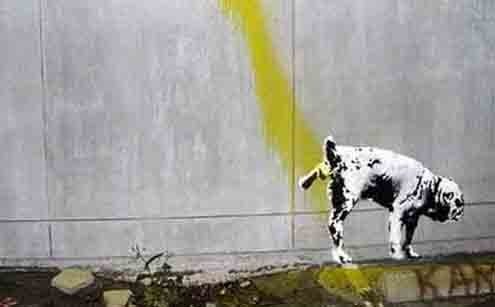 Banksy had the right idea…
W

hen I sat down to write this column, I wanted it to pay homage to rural Tuscan life or more aptly extend a middle finger to “Under the Tuscan Sun.” The nth version of that “aren’t the locals funny” article you’ve read on some expat’s blog. A sort of “Italians say the darndest things,” if you will, but without the Chianti-toting host.

It all started when a colleague made a joke: “The weather was marginally sunny this weekend. I imagine you went to the beach.” Faithful readers will know I dress light, but he was suggesting I considered 20C the ideal sunbaking temperature. I snorted and said, “I’m not English,” but he didn’t get it.

Later that day, I went to the fishmonger (yes, we still have one), and she enquired, “What do you think is the best way to cook clams?” The fishmonger and I have not been the best of friends since she made fun of my Italian. I rolled my eyes and asked, “Isn’t that your job?” She didn’t get it.

Outside, one of my politician husband Giulio’s Facebook friends stopped me. I want to make it clear that this person is one of the 3,000 people Giulio considers Facebook friends in his lifelong journey to become the next Matteo Renzi. He looked serious. I didn’t remember his name. Not a surprise. I firmly believe learning someone’s name is only necessary when they can be of some use to me. Unsurprisingly, I have very few friends. He blustered, “Tell your husband if he wants to become mayor, he should stop posting pictures of all those foreign dishes. He should be posting tagliatelle al ragù di cinghiale.” I nodded and muttered something non-committal. I won’t be told what to eat, and besides, Giulio only listens to his closest advisor. It’s the Steve Bannon to his President Trump… and it’s Giulio.

I made a beeline for the hairdresser, trying to avoid a hit-and-run scenario at the pedestrian crossing. Stopping is optional. So is wearing a seatbelt, following the speed limit, securing your baby seat, actually investing in a baby seat, and monogamy. Last one’s not a typo. Holding onto your spouse in small town Tuscany is harder than catching a pig at a county fair. I’m being folksy, but it’s a serious problem.

I abhor the hairdresser. She is the town hussy (yes, we have one those). She’s on the other side of 50 and acts like she is still in her teens. Her studio is stuck in a proverbial Groundhog Day and, like the movie, it’s still 1993. Words along the lines of “just a trim” tumbled inelegantly out of my mouth. I ended up with the sort of bob Monica Geller would have loved and a sense of unease that comes from middle-aged women using Facebook.

Call me a millennial, but I liked it better when your mum and crazy aunty couldn’t figure out how to turn on the computer. I don’t want to listen to them scroll down someone’s wall with their fire engine red talons while they muse about the hussy hairdresser being the town “bicycle,” how poorly Francesco has aged or how Antonietta’s sister-in-law went to a Van Gogh exhibition for her birthday because she thinks she’s so sophisticated. I like it even less when they try to draw me into the conversation. I firmly believe small talk is asinine and I never ask anyone how they are. Naturally, I have very few friends.

I left and went to pick wattle’s Maremman cousin, mimosa. Living in country Tuscany has made me terribly resourceful, so I raced the sun and broke into one of the townsfolk’s gardens. I fly solo whenever I’m doing something unsavory. Giulio treads water somewhere between adventure prude and 15-year-old girl. He can’t seem to get past what other people might say.

Bunch of yellow mimosa puffballs in hand, I was accosted by our elderly neighbor Adelina. She screamed, “You think you’re kings of the alleyway! Well I have the right to park here too!” Legendarily discreet, she hurled these words from the balcony of her third-story apartment. I said, “I know, last week, you managed to drive your car into our steps and broke your headlight. The glass is still there.” I added, “you old coot” for good measure, but she’d already gone back inside.

I walked into our alleyway as a man was walking out waving. I didn’t know him, so I didn’t wave back. As I headed towards the steps to my home a stream of liquid ran from the alleyway’s wall and pooled at my feet, carrying flecks of Adelina’s headlight with it. I turned, but the man was gone. God, I hope it rains soon.