A date with destiny 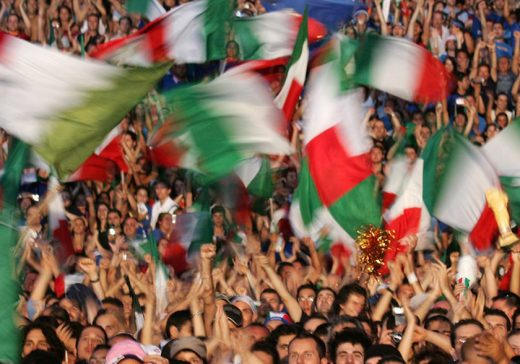 Italian passion can seem unrivaled, as it was in 2006 when it won the World Cup by defeating… France.
F

or Goethe, Italy was the idyllic land of golden oranges. For Bertrand Russell, its beauty could lift any depression. Franz Liszt and Henry James couldn’t stay away. Axel Munthe, who chose Capri as his home, came and never left. Queen Christina abdicated the Swedish throne to live out her life in Rome. When D.H. Lawrence was writing “Lady Chatterley’s Lover“ it was not English gamekeepers he had in front of his eyes, but Tuscan peasants. My husband Alvin Curran began dreaming of Italy while watching Neorealist movies in high school. And if you’re traveling around the peninsula these days, you may trip over George Clooney, Brad Pitt, Sting, Willem Dafoe, Johnny Depp, Francis Ford Coppola, or Madonna near their Italian homes.

Not me. Nothing about my childhood in the New York projects could have placed my Italian future in a fortune-teller’s crystal ball. Its only presence in my young universe came in the form of “Italian ice,” a kind of lemony mush sold from a pushcart in soft pleated paper cups that we kids would squeeze into our mouths like toothpaste from tubes. The closest my mother came to Italian cooking was SpaghettiOs.

As a kid I didn’t know any Italians, though they probably lurked among the tribe of Catholics who showed up one day in second grade, after their First Communion, wearing petticoats under party dresses and flaunting stacks of playing cards that bore Madonnas and sparkling hearts in place of pips.

Nothing about my childhood in the New York projects could have placed my Italian future in a fortune-teller’s crystal ball.

The Catholic girl I remember best was a fellow-tomboy who had red hair and must have been Irish. She not only believed in God but had met him when she went to Heaven to visit her little brother who had died. The heaven she saw was a big room lined on both sides with beds. I wonder, is that what planted the idea in my head that American doctors think they’re almighty?

After we moved out to the suburbs I went to high school with plenty of Italian-Americans, whose home turf mostly lay on the far side of the Long Island Railroad tracks. I was scared of some of the guys, the kind we called “hoods” and baffled by some of the girls. They dressed like tramps, but when we changed for gym in the locker room they modestly shielded their bras with towels.

If Italy had ever had a chance to be my teenage fantasy land, it received a fatal blow one Friday when Madame Gustin, my beloved French teacher, lent me a small-size LP of songs by Georges Brassens. The song I was supposed to listen to was a setting to music of François Villon’s famous poem about the snows of yesteryear. But in a weekend of playing the record over and over I managed to figure out that the other songs described earthier subjects such as young couples making out on park benches and a girl nursing a kitten at her breast. Overnight I was a budding Francophile, dreaming of idle afternoons swigging coups de rouge to a soundtrack of risqué songs.

Italy remained well under my radar through college and beyond. Nothing about it attracted me, from the spaghetti-and-meatballs cuisine that at the time passed for Italian food to the Italian paintings on display at New York’s Metropolitan Museum. I appreciate neither the Tuscan Primitives (too stiff) nor the Roman School (way over the top).

Within two days I had discovered a separate and gentler universe, where people never uttered a word of reproof.

One February day in 1970 I was happily living out my French dreams in the sidewalk cafés of Aix-En-Provence when the news arrived that my friend Ursula Oppens would be playing a major piano concert in Milan. Reluctantly, out of loyalty, I made a hop across the Italian border to hear her play, meaning also to visit the Brera, then scoot back to my stoner pals in Aix.

Instead, I found myself an instant Italian convert. During my months in France I had gotten used to always having to keep on my toes. I was considered a cultural ignoramus by definition, chastised for every French grammatical error, criticized for being a citizen of the country waging war in Vietnam — as though I’d always been on the anti-war side of the barricades. Across the Alps in Italy, within two days I had discovered a separate and gentler universe, where people never uttered a word of reproof. They listened to what you had to say and accepted you for who you were, even when they were casually demonstrating how much better off you’d be if you adopted their food, their songs, their wine, their ways of dressing and putting on makeup. They relished every word you tried out in their language. From then on, there was no looking back – France was history, Italy would be my stomping ground, at least until that August. Though it would take eight years before I actually managed to move to Italy permanently, I was hooked. As it turns out, for good.