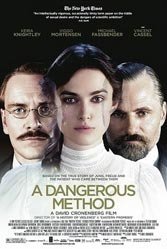 Praise David Cronenberg for a poised snapshot of the frontier days of psychoanalysis, but don’t confuse the maker of this film with the director of “A History of Violence” and “Eastern Promises,” each one focused and remorseless. He’s nowhere present here.

It’s 1902. Russian Sabina Spielrein (Keira Knightley), a young woman sickened into a raving snarl, is sent by her family to the upscale Swiss clinic that includes the frontier psychoanalyst Carl Jung (Michael Fassbender), an early devotee of Vienna-based Sigmund Freud. Jung’s work with Spielrein gradually helps her not only recognize but emerge from her abyss, opening the door to a return to her life’s dream of working in therapy. But the fixing comes at a price: Happily married Jung is sucked in by the aroused and voracious Jewess. This detail matters because Jung is at odds with Fraud (Viggo Mortensen) that all neuroses have sexual roots. For the vaguely prudish Jung, “unscientific” dreams are the mind’s indelible statements, a belief that fractures his close relationship with his more doctrinaire mentor.

Cronenberg renders all this persuasively, using Spielrein’s accented hysterics to frame each man’s ambitions and frailties. Class and cash play a central role (Jung has married into wealth while Freud struggles), so do the social and sexual conventions of the time: While affairs can be intellectually understood, they should not be pursued, something that tears the fragile Jung apart.

The story spans two decades, beginning with the advent of World War I and concluding in the 1930s, with the destruction of Teutonic erudition’s civil premises imminent. Fassbender’s Jung is vivid but bewildered; Mortensen’s Freud is sly but wooden, and Knightley, passionate throughout, sounds one note only. The film’s lone surprise, and it’s a pleasant one, is Vincent Cassel as Otto Gross, a mind doctor disguised as madcap rebel and rogue. He helps Jung own up to his lust. All in all, this is a fine but oddly stilted film.

Based on author John Kerr’s 1993 “A Most Dangerous Method: the story of Jung, Freud, and Sabina Spielrein” and Christopher Hampton’s 2002 play “The Talking Cure.”