A Cure for Suicide 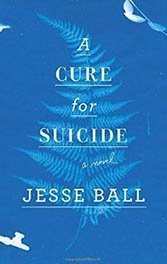 A man wakes from a void and finds himself in a room in a house near a quaint village. His only companion is a woman. He is the “claimant.” She is the “examiner.” All he knows of himself is what she tells him: that he was “very ill” and is in the process of being righted — “You are coming back into yourself.” Around him is the gingerbread scenery of a rustic children’s book. He is given a “practice” name, Martin Rueger, and then a real one, Henry Caul. He is taught simple things and reeducated one detail at a time into what he’s told will be tranquil life. But how did all this come to be? Who is he, really? What universe does he now inhabit? Why does he still have unsettling dreams? Why is there a woman, Hilda, telling him the re-education process is a sham?

Jesse Ball is a wondrously clever and resourceful writer. Here he creates a parable about a state that’s developed a plan to “assist” citizens who decide life is too painful to live. The worst cases are euthanized and revived in bucolic parallel places in which human torment is excised, their landscape inhabited by actors selected to play soothing roles in an existence in which “events are just events. Nothing is more important than anything else.” This transformation is called the “Process of Villages,” with the shifting villages a place where you shed the “clothing of [your] old life,” free yourself from “tales and personal legends,” and listen to the “examiner” who serves as a guide and arranger and also monitors your progress.

The novel works backwards, from the confused man’s arrival in a village — Case 42395D — to the surreal story of love and suffering that led to him to despair. Ball’s novel’s Teutonic-hued language is sinuously beautiful in the complex spirit of Austrian Thomas Bernhard. He posits a society that transfers its casualties into a theater of the neural neutral in which “human nature [is] boiled down to its core, and repeated until the proportions are exact.” Yet the transformation is not without setbacks. Even the gingerbread world can malfunction.

Few American writers possess Ball’s moral ambition. His suicide “remedy” is at once compassionate and terrifying. “There are those of us who cannot continue,” explains the head of the Department of Failure. The “republic” decided to fix this “problem of problem” by extending a hand to those stricken with “dense, black grief.” What does a successful claimant get? “An unspecified life,” no raw edges, no disproportions.

Ball teaches a class in lucid dreaming, a title that aptly reflects his visionary notions of the future, or of a parallel present. He is an unusually gifted landscape artist of the nook-filled mind.