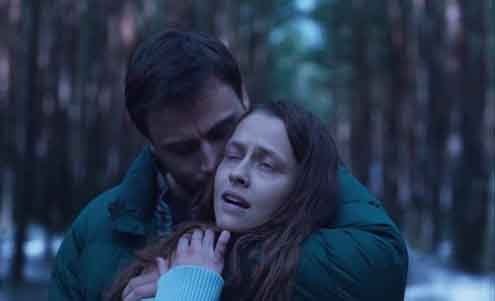 he title of this film is an obvious reference to the Stockholm syndrome, named for a 1973 bank robbery in which hostages bonded with the robbers — that is, captives bonded with captors. Stockholm syndrome is most identified with Patricia Hearst, who as a 19-year-old newspaper heiress was kidnapped in 1974 by a bizarre leftist group known as the Symbionese Liberation Army and later participated in criminal activity with her captors for which she was convicted. More bonding.

In this case, however, the reference is misleading if not erroneous. Clare (Teresa Palmer) the Australian tourist held captive in “Berlin Syndrome,” does not bond with her German captor, high school teacher Andi (Max Riemelt). Although she sometimes seeks to please him, sexually and otherwise, and she sometimes receives pleasure herself, her goal — from beginning to end— is to escape the confines of Andi’s illegal East Berlin apartment.

Captivity narratives are a staple of American culture, dating back to the kidnapping of colonial women and children by Native American tribes. In film, the most notable recent examples are “Misery” (1990), in which a woman holds a man captive, and “Room” (2015), featuring a mother forced to raise her young son — the product of her rape by her captor — while held in a small shed.

“Berlin Syndrome” is not as frightening and disturbing as the first hour of “Room,” but it is a worthy entry in the horror-captivity genre. Palmer and Riemelt are well cast. Both are attractive but not exceptionally so; they are an ordinary victim and an apparently ordinary perpetrator, caught up in something odd, ugly, and potentially deadly. Clare’s conventional looks and her desire to leave behind what she describes as her boring existence in Australia also reference Patty Hearst and Hearst’s rejection, albeit temporarily, of her unadventurous life.

Kidnapping, of course, is no ordinary activity, and Andi, while often charming, is also menacing, malevolent, creepy, and violent. His attraction to women is matched by a deep revulsion, apparently caused by his mother abandoning him as a child when she defected from East Germany. To Andi, women are whores (both desirable and disgusting), and to be touched by a woman— even to have his coffee cup touched by a woman—is almost more than he can bear. Hardly novel.

On the creepy scale, he clips and paints toenails — among them, his victims’ and his dead father’s. And his first meeting with Clare is marked by a visit to a set of tiny cottages complete with statues of dwarfs. Living in the cottages, he explains, is “prohibited,” as is, of course, living in a squat.

Another explanation for his behavior, offered in the form of an analogy by a student in his literature class, is that he, like James Baldwin (author of “Giovanni’s Room,” the text under discussion in the class) is “trying to escape.” There is the possibility, too, that Andi’s elaborate efforts to convert rooms in an abandoned East Berlin building into the perfect prison reflect some grand, even utopian, design; he gives Clare a copy of illustrator David Macauly’s 1973 book “Cathedral,” the story of the construction of a medieval church.

“Berlin Syndrome,” based on a novel written by Australian Melanie Joosten and directed by another Australian, Cate Shortland, could sustain a feminist reading. It is women—never men — who figure out the sinister Andi behind the normal-looking teacher. A female colleague kicks him out of her party when she sees how weird he can be. Franka (Emma Bading), a student who seems initially to be attracted to her teacher leering at her, understands she needs to assist Clare in an escape attempt. Clare, unlike Hearst, is dogged and inventive in trying to break out of the rooms where she is held captive.

These various explanations do not make “Berlin Syndrome” a thought-provoking film. If anything, it is muddled by too many possible readings, thereby losing interpretive focus. The film doesn’t hinge on Syndrome bonding, and references to Hearst are vague at best. Without the title, the thought of Stockholm syndrome might not even come up. Nonetheless, and despite a contrived denouement and corny final frames, the actors and director achieve the sustained tension of a solid, entertaining thriller.