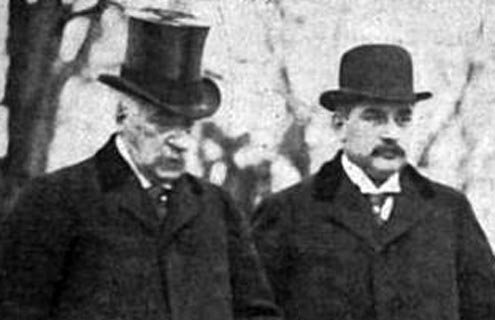 J.P. Morgan and "junior," right, shown together before the outbreak of World War I.
T

he celebrities of the American 1920s were mostly capitalists and aviators, with a few silent film stars latching onto to modernism’s frenzied coattails. The so-called “Roaring Twenties” were rapacious. Gangsters acquired automatic weapons, radio use skyrocketed, New York City and Chicago grew fast and tall, and “talkies” began transforming Hollywood.

In 1924, J.P. Morgan, Jr., following his father’s wishes, made his family library located in the city’s Murray Hill section into a public institution known as the Pierpoint Morgan Library. Morgan’s powerful librarian, Belle da Costa Greene, busied herself acquiring major works, money no object. She benefited enormously from the Morgan family role in World War I, when J.P. Morgan, Jr. loaned pre-revolutionary Russia $12 million to Russia and $50 million to France. But Morgan favored England above all, financing the Allied cause — interest included — for hundreds of millions of dollars before the United States entered the war in 1917.

His deep involvement didn’t endear him to the isolationist side of American public opinion, politicians determined to keep the U.S. out of the European conflict (the same such undercurrents surfaced before World War II), or aesthetes like poet Ezra Pound, who cried usury. Later, Morgan, an ardent private sector banker, would issue further European loans, including to Italian dictator Benito Mussolini, while fiercely opposing Franklin Roosevelt’s New Deal.

The banking controversies tended to obscure Morgan’s interest in philanthropy and his desire to transform his family library into an enduring cultural venue.

Journalist Percy Winner, then 25, had just returned from France and Italy, employed by the Associated Press in New York. He began writing dispatches about the growing library and its imminent public transformation. Though deeply private in his day-to-day life, Morgan was presciently aware of the importance of good press, as this 1924 letter demonstrates.

Even at the time, most such letters were delegated to lackeys or assistants. But Morgan, then in his late 50s, knew some good press might lead to more good press, particularly if he anointed the writer. So he ensured his letter took a personal approach.

Today, the Morgan Library & Museum, which was declared a New York City landmark in 1966, continues housing a host of literary works, early prints, and even keynote slivers of American pop culture, including the scraps used by songwriter Bob Dylan to write “Blowin’ in the Wind” and “It Ain’t Me Babe.” The Library was renovated in 2006, with a new entrance designed by acclaimed Italian architect Renzo Piano.

J.P. Morgan, Jr. died in 1943, with his legacy divided between those who saw him as a consummate American moneyman and those who accused him of playing glorified gunrunner, using the fruits of conflict to fortify his already considerable fortune.

Please accept my thanks for your help in making public the announcement of the establishment of The Pierpoint Morgan Library. I thought when I was talking with you that you were quickly realizing the nature and purpose of the trust and of the necessities for its maintenance, and your articles show that I was right. It was important that there should be correct understanding of the plan and for your intelligent and sympathetic contributions to that end I am very grateful.