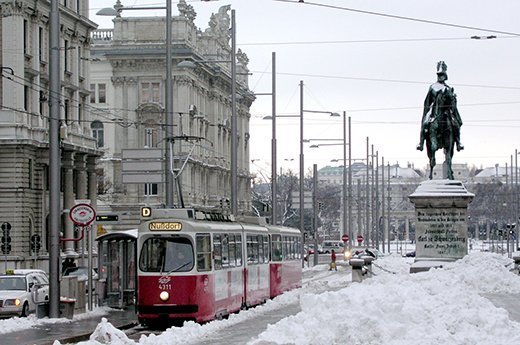 lifetime ago I worked in Vienna. I remember that time as among the darkest and the coldest of my life. Central European winters are traditionally long, but the winter of 1995 constantly left the city clad in a slurry of snow.

Every morning I’d run from my small apartment to take a very early subway train. After that came another run to a bus which would bring me and a large group of other researchers to the International Atomic Energy Agency’s Seibersdorf Lab in the Austrian tundra some 40 kilometers south of Vienna.

We passed fields so wrapped in snow it defeated even the poor deer who’d ventured out in search of food. I watched them trying to make their way knee deep in the frigid whiteness.

I often fed myself chicken soup and noodles. My only small consolation was to stop at a street stand and buy a handful of roasted chestnuts. They kept me warm and reminded me of home.

Those were very long days, not only because of the forbidding weather but also because I had little affection for the project (on disease-causing tsetse flies) for which I’d been hired. There were workdays when my only goal was to re-cross the tundra, return home, and cuddle up on the couch to call my boyfriend — now husband — who was living too far away.

Vienna was an odd place to live at the time. Shops closed at 6:30 p.m. and we’d only get back from the lab at six, leaving all but no time for shopping or even a bit of urban distraction. As a result the bad timing, I often fed myself chicken soup and noodles. My only small consolation was to stop at a street stand and buy a handful of roasted chestnuts. They kept me warm and reminded me of home. Geographically speaking, Italy was just down the road, a short plane ride away, but at the time it felt very far away.

That harsh winter —which started in October 1995 and didn’t end until six months later, after six solid months of snow and cruel winds — left a humbling mark on me. Whenever I reflect on crazy and chaotic Italy, I’m chastened by memories of snow, deer and tundra. After Vienna, I came back to Italy in search beauty and warmth in every sense. And it rewarded me. We do get snow in Umbria, but usually for just a few days a year.

Our days are luminous and mild well into November, occasionally until Christmas. The seasonal food is delicious, with plenty of mushrooms, truffles, juicy pears, freshly pressed olive oil and of course, chestnuts. For now, it’s not chilly enough to roast them on our wood oven.

To satisfy my craving for chestnuts, I’ve turned instead to making creams to introduce to my cooking class. They’re always been a hit.

For those of you who can’t just step outside and pick chestnuts or don’t have a local farmer’s market that sells them, try using chestnut jam (and a dose of creativity). Once you’re done, cuddle up, pretend you’re stuck in Vienna, or at home in Umbria, and call your beloved.

Chestnut mascarpone cream with toasted almonds: if you can’t find chestnuts, use jam.

This recipe requires a chestnut spread, puree, and paste or jam (well-known brands include Bonne Maman, Merchant Gourmet, Clement Faugier). My chestnut jam is sweet enough not to need additional sugar, but some might.

— Stir the mascarpone into the ricotta and whisk until smooth.

— Swirl in the chestnut spread and distribute into 8 dessert cups or plates. Make sure to make small portions. It’s decadently rich. A small amount goes a long way.

— Sprinkle with toasted nuts, drizzle with liqueur and serve.