A Church in Search of Itself: Benedict XVI and the Battle for the Future 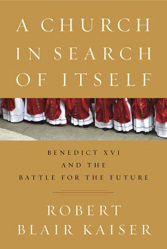 his global assessment of today’s Roman Catholic Church takes the author to five continents where he interviews, among other luminaries, six Cardinals who took part in the conclave that elected its most polarizing figure, Josef Ratzinger, as Pope Benedict XVI. Structuring the work around the conclave and its implications, Kaiser offers an in-depth analysis of the forces that met in Rome, where the conflict between “power to the people” liberals and “pay, pray, and obey” conservatives was aired but left unresolved.

In probing the deepening crisis surrounding papal politics, this illuminating study examines the historical background and raises the major issues facing the Church under the leadership of an tough pontiff who is viewed as likely to remain more Roman than Catholic.