A Cat, A Man, and Two Women 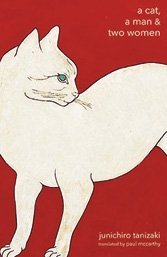 By Junichiro Tanizaki, translated from the Japanese by Paul McCarthy

A cat named Lily that lords over a marriage long two wives; a bullying schoolboy who sounds every bit like a wily Soviet dictator; a bored and laconic Bartleby-like professor who has a teenage girl sit astride him and slap him with a little rattan cane — these are the spices Japanese master Junichuro Tanizaki’s brings to three stories, the novella “A Cat, A Man, and Two Women” its crowning achievement. In it, a twenty-something fat-boy Shozo cares less about his fastidious first wife and his self-indulgent second one than Lily, his beloved queen, she whose winning farts and picky affection eventually determines the behavior of all three principles, each one trivially jealous of the other because they can’t fully possess the unpossessible, a cat, a feckless creature who inspires dim-wit Shozo’s “limitless affection.” It’s a cat story like few others, since all the humans say and do depend on the actual and metaphorical vagaries of the feline. What Shozo sees in Lily he can’t “express directly to human beings,” which says as much about humans as cats.

“The Little Kingdom” is more gleefully political, since Tanizaki (1886-1965) wrote it in the mid-1930s as (bullying) Japan looked warily at (bullying) Soviet Russia’s ascent. An uninspiring schoolboy inexplicably wins the loyalty and eventually the fealty of his classmates, to the point of creating a manipulative hierarchy that anoints him president and whose conduct he polices with secret agents. Eventually even the provincial teacher and narrator must capitulate. When you’re desperate, any kind of order will do.

As for eccentric Professor Rado of the eponymous story, he seems unable to reply to a journalist’s questions with anything but “uh” or “uhn.” He’s inscrutable. He also happens to be “a devout admirer of the female foot,” part and parcel of Tanizaki’s teasing fascination with the lewd. Rado’s desires are unspeakable, literally.

Tanizaki’s tales show the capriciously quirky side of one of Japan’s greatest storytellers, who in general focused on middle class excesses. Here he flirts with the fringes, with incidental weaknesses exaggerated so that they become hypnotically odd. Humans are silly and above all impressionable, putty in the hands of cats and fifth-grade dictators.