A Bucket of Blood 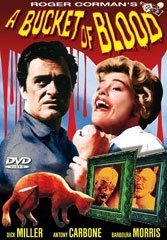 Dead cat sculptures aside, this Beatnik-taunting shlockfest is as literate as horror movies come. Nebbish busboy Walter Paisley (Paul Newman knockoff Dick Miller) can’t catch a break while waiting tables at a hoity toity artist’s cafe. Mocked as without talent by the cafe’s resident bohemians, his artistic frustration ferments in the form of a bungled Play Doh a sculpture of his crush, painter Carla (Barboura Morris).

It wouldn’t be camp without a double shot of bad taste. When the landlord’s noisy kitten issues one too many caterwauls, Walter stabs the animal, covers up the evidence with clay — then hauls it back to the cafe, knife included. Carla proclaims the sculpture, “brilliant.” “You sculpted that?” asks Walter’s boss Leonard (Antony Carbone), who can’t get past Walter’s feeblemindedness (and who later catches onto his grisly source material).

Under pressure from the fawning artist’s community to produce more, a nervous Walter strains for bigger and better subjects: humans. All this unbeknownst to the beatniks, who embrace the sculptures for their perfect anatomy and gloomy appeal (“hideous and eloquent”). Walters glorifies his discreet murders as “art” that turns his victims “immortal.”

What director Roger Corman may have created in Walter is an incidental portent of the serial-killer-cum-pseudo-philosopher Charles Manson. Manson, who often spoke of his murders the same way, wouldn’t become infamous until several years after the film’s 1959 release.

Scraping in at less than 70 minutes, “A Bucket of Blood” is short but not sweet — tart’s more like it. An ideal film for Halloween parties, late-night cable, or your next Boho-chic roundtable.