A brief history of focaccia 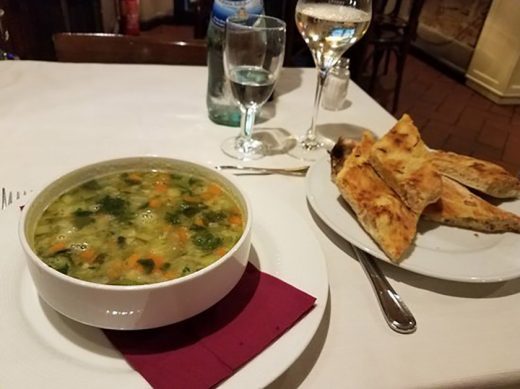 The holy grail of Italian flatbreads is composed of a quartet, Pizza bianca, focaccia, schiacciata, and pinsa.
F

latbread has long been a human staple with a history that dates back at least a millennia. In 2018, archaeologists working on a dig in Turkey unearthed bread they estimated had been baked some 9,000 years earlier. Eerily preserved sliced flatbread found caked in ash in Pompeii is proof that bakers were at work on the very morning Mount Vesuvius erupted in 79 A.D. Well before then, the ancient Greeks made flatbread they called plakous, seasoned with onions, herbs, and garlic. Already in the 16th century, port workers in Naples snacked on a crisp flatbread revived and seasoned by dipping it in (then clean) seawater.

In time, Italy became responsible for the creation of countless kinds of flatbread. The differences between classic flatbread, which had no toppings, and its herb-flavored successors are sometimes subtle. Generalizations and confusion are a natural consequence.

Let me try to break things down, starting with the quartet that — with manifold variations — forms the holy grail, Pizza bianca, focaccia, schiacciata, and pinsa. These four flatbread incarnations are made from simple flour dough, water, yeast, and salt — then baked and seasoned with olive oil. At first glance, however, they all tend to look alike. In fact, they’re not, and the distinctions between them matter more than ingredients and names.

The holy grail of Italian flatbreads is composed of a quartet, Pizza bianca, focaccia, schiacciata, and pinsa.

Take the pizza bianca and focaccia. While plain, the tomato-less pizza bianca popular in Rome is made according to a fairly similar baking process that’s standard throughout the city. Focaccia, on the other hand, varies considerably, especially by region.

Pizza bianca is a Rome specialty, plain bread with no topping covered, with uneven dough bubbles that have popped up during baking. Also known as pizza alla pala, pizza bianca is made from very elastic dough and contains the same ingredients as focaccia. It is leavened differently, however, and baked in a blazing oven (its shelves made from ceramics, or baking stone), and produced in the form of rectangular or oblong slabs. Double leavening and dimples on the surface create large air pockets that allow the pizza bianca to be sliced and filled. Quintessential pizza bianca fillings include thinly carved mortadella, or prosciutto and fresh figs.

Before pizza bianca came pinsa, a flatbread whose origins are also predictably ancient. Pinsa originates from the Latin “pinsere” — to hand-stretch. Ancient Romans made a mixture of water, ground millet, barley, and oats (and later farro) and formed it into a flatbread that was then baked on a level stone (which lay on a bed of hot ashes). Nowadays, light, oval pinsa is still made with a mix of flours (wheat, rice, soy). This kind of pinsa is enjoying tremendous success worldwide for its perfect single-portion size and endless topping possibilities. The plain dough is highly digestible thanks to 72-hour leavening through cold fermentation (which breaks down the starches and glutens), high hydration, and sourdough starters.

Pizza bianca “breaks” out in bubbles.

But neither pizza bianca, or its older predecessor pinsa, is focaccia. Italians cringe when the breads are mistaken for each other. What, then, is focaccia?

The word itself comes from the Latin panis focacius, where “panis” means bread and “focacius” is the word for “the center of the fireplace,” where this popular food was once baked.

These days, by focaccia we intend a thick, soft, spongy flatbread made with a mix of “00” wheat flour, water, olive oil, yeast, and salt. Focaccia can be more or less fluffy, or slightly crisp. Its exact texture depends on the individual baker. Sometimes the fluffy is very fluffy, the crisp very crisp.

As with some Roman-style pizza bianca, barley malt may also be present in small quantities in the dough. Hydration is another key characteristic. The percentage of water, as compared to the amount of flour (expressed in kilos), required to make focaccia is between 55 percent and 60 percent. Olive oil, which must be strictly extra virgin, is present in abundance and gives the dough a supple texture.

Focaccia has a distinctive and delicate proofing phase — that is, the dough’s second rising period. The first leavening occurs when the dough is first kneaded; the second begins when the portioned dough is spread on the oil-greased sheet pan it will later be baked in. It is inside the focaccia resting in the pan, and left to proof for up to 4 hours, that the yeast does its most laborious work before even entering the oven. The dough grows slowly, creating internal microbubbles, which make the mass rise evenly. This is what gives focaccia its classic spongy crumb.

At this point, the focaccia is dimpled with fingertips, slathered with copious amounts of olive oil, and sprinkled with coarse salt crystals. Baking is typically carried out in electric ovens, or wood-fired ovens, interchangeably and for about 15 minutes.

Thanks to the regional twists in Italy’s biodiversity (and kitchen twists as well), there is a multitude of focaccias to choose from. Consider focaccia genovese. This port city variation uses a brine in addition to olive oil. The baking is not explosive, like for pizza. Instead, it is done with milder temperatures, ranging between 240-250C (480F), until the surface is lightly golden. Focaccia genovese (fügassa, in dialect) is soft with a slightly crisp bottom, thanks to the oil drenching the sheet pan, the surface is dotted with salt crystals, and the crumb is fine and feather-light.

Only a few miles away in the same region, in the town of Recco, what people refer to as focaccia is a whole other story.

In Liguria, focaccia has many more sisters. There’s piscialandrea, aka sardenaira — a close relative of the anchovy and onion-topped pissaladière from Nice — and also focaccia topped with onions, or focaccia with pitted green olives pushed into the thick dough before baking.

Bordering Liguria to the easternmost tip is Tuscany, where focaccia goes by the name of schiacciata. Depending on where in Tuscany, it can also be called ciaccia, schiaccia, schiacciatina, or ciaccino. While Tuscan sourdough bread is sciapo, unsalted, focaccia brings a savory addition to the Tuscan table, and can sometimes come dusted with a few rosemary needles on the surface.

Focaccia is thick, soft, spongy flatbread made with a mix of “00” wheat flour, water, olive oil, yeast, and salt. It can be more or less fluffy, or slightly crisp.

Yet focaccia in Tuscany can also be sweet: schiacciata con l’uva. During harvest season, whole uva canaiola grapes (somewhat similar to the concord variety) are added to flattened bread dough.

Sweet focaccia with grapes is particular to Florence and Prato but is also found in other cities, where it’s called by a variety of different names. In Siena, it’s ciaccia con l’uva. In Florence, it’s called pan con l’uva or stiaccia. In the inland areas of the Grosseto province, it’s called schiaccia con l’uva. According to the original recipe, Tuscans never remove the seeds from the grapes, which are a distinctive ingredient and characteristic of their sweet focaccia.

In the Pianura Padana, in the vast Po River valley, schiacciata con i ciccioli is a classic flatbread, which also goes by the name crescenta, or gnocco ingrassato. Similar to this focaccia studded with fried pork cracklings is the Venetian pinza veneziana, which incorporates, in its fluffy crumb, diced salami or pancetta. 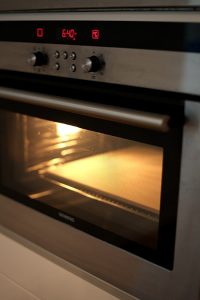 Focaccia is baked in an oven on ceramic baking stone, or in a wood-burning oven.

In Reggio Emilia and Mantua, the rare variant made with fried goose lardons comes from the ancient Jewish tradition.

Further south in Puglia, focaccia barese, hailing from the port town of Bari, is a regional staple. Traditionally it is baked in the area between Altamura and Bari, and from the region’s capital down to Taranto. Baked in small round pans in wood-stoked ovens, the dough is a balanced mix of twice-milled semolina flour, yeast, and boiled potatoes. The surface is studded with cherry tomatoes (and sometimes olives) and seasoned with oregano and local olive oil.

Also from the “heel of the boot” comes puccia, similar to a small loaf of bread, and widespread throughout Puglia, where it is made in several different ways. Originally from the coastal paradise of Salento, puccia has come a long way from being frugal peasant food; it is now the emblem of modern street food.

In Basilicata, strazzata lucana was born as a typical celebratory focaccia for weddings and ceremonies. The dialectal shift on the name, “ripped,” is because the dough was hand torn (in Italian, strappata) rather than portioned with a knife. The basic ingredients of this ring-shaped focaccia are water, yeast, flour, ground black pepper, and oregano; another version also includes the addition of rendered lard.

In Sicily, where the cuisine is the product of many overlapping cultures, sfincione is the regional focaccia. This is a western Sicilian specialty, a thick focaccia topped with tomato sauce, sautéed onions, optional anchovies, and grated caciocavallo cheese. The origin of sfincione, which loosely translates to “thick sponge,” dates back to the 17th century. This particular focaccia’s most crucial ingredient, tomatoes, were brought over from South America following Columbus’s discoveries, and first grown in Sicily in the 16th century. Baked in metal pans and cut into squares, sfincione is sold in the streets or in open-air markets by sfinciunari sellers. Traditionally served on Christmas Eve, New Year’s Eve, and Good Friday, in the warmer months it’s instead served at room temperature.

On the other side of the island, focaccia alla messinese is a thick and fluffy focaccia topped with fresh tomatoes, shredded endive, Tuma goat cheese, and anchovies. Messina’s most popular typical street food is appreciated in all of northeastern Sicily.

Looking like a galette, Sardinian su mustazzeddu is a specialty of the island’s province of Sulcis Iglesiente. This typical focaccia is prepared with a dough of leavened bread (preferably obtained with a natural starter, although brewer’s yeast is also commonly used). Once baked, the focaccia can be enjoyed plain, or filled with tomato and basil. Different areas of the province produce slightly different versions: with or without garlic, with added oregano, without basil, or with tomato paste directly blended into the dough.

Next time, think twice before calling any flatbread focaccia!