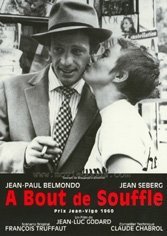 Jean-Luc Godard’s je m’en fous noir about love, betrayal, gangsters, and points in between is essential to modern cinematography for the way the nosy, freewheeling camera won’t leave the poignant action alone. Paris gangster Michel Poiccard (twitchy Jean Paul Belmondo) is squeezed in and out of his own story, same with flirt and would-be companion Patricia Franchini (the cool Jean Seberg). The camera’s unprecedented appetite (and Belmondo’s droopy smoking) drained the bathwater and brought on the New Wave (Nouvelle Vague sounds better).

The story, however, is fairly conventional. Petty crook and Bogart romantic Michel falls for the wrong girl — a minimalist American, no less. She doesn’t understand him, but also gets him killed (not that he wasn’t headed that way). In between, the bad guy is both bad and loving; cops hunt him down; car engines are gunned; and the Gitane gets its due as French cultural icon (along with lips). Belmondo and Seberg are either irresistible or wooden, depending on the action. The problem is Godard’s infinite selff-awareness. You know he knows he’s making a movie. It can be a burden.

There’s still considerable debate about dying Michel’s final line (“C’est vraiment déguelasse“) — at least among Godard students — but “Life’s a bitch” will do, because then you die.