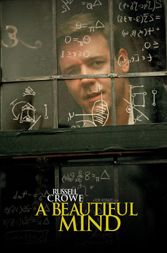 You can protest that Ron Howard’s movie about legendary math genius John Nash (Russell Crowe) has no bearing on the real Nash, an often misanthropic visionary. That aside, Howard offers an inspirational tale about a troubled outcast whose life is a struggle against an array of invented demons. Princeton’s Nash was asked to break Soviet codes, ushering him headlong into paranoia.

Crowe is an everlastingly committed actor. He’s both vulnerable and fierce, one fueling the other. Jennifer Connelly does what she can as his stalwart student-become-wife Alicia. Howard clearly wants to deliver an “Apollo 13” for the intellectual crowd. But “Apollo” succeeded because the character load was shared generously. Here, it’s all about Nash and the satellites positioned perfectly around him. Like Nash, the film is schizophrenic, wildly desperate or pie-in-the-sky uplifting. Too much Hollywood can kill a good thing.