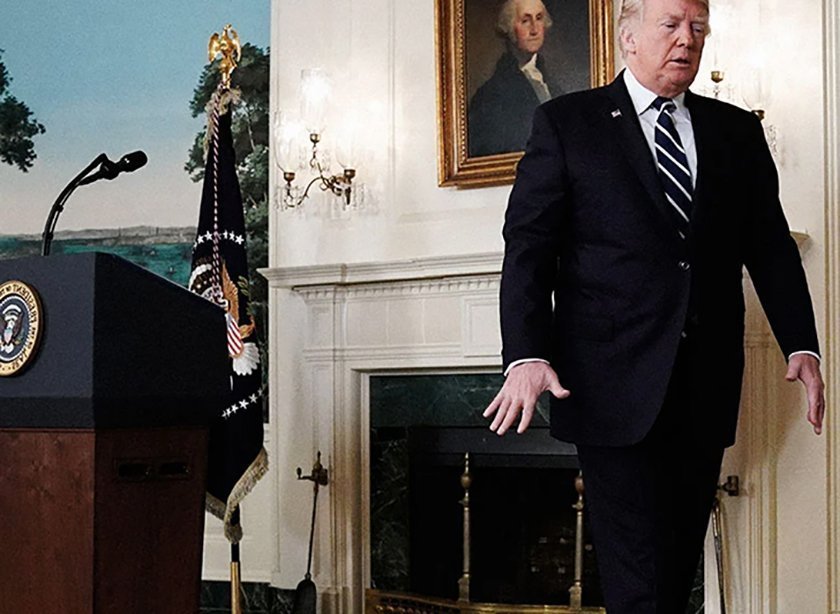 Losing is one thing, walking away quite another...
P

ower of attorney is granted by one person to an anointed surrogate in the event the figure charged with decision-making is, for whatever reason, incapacitated. But its 2020 meaning may well overflow the bounds of legal parlance toward a meaning that is far more literal. Lawyers on both sides of the presidential tickets are already poised — on a state-by-state basis, if necessary — to challenge the results of an unusually volatile contest that, no matter the official verdict eventually rendered by the Electoral College, is almost certain to stir up more than its fair share of muck and mire. Given the legal drumbeat, the timing of a definitive and mutually accepted result is, to say the least, open-ended.

For now, national polls show Trump at a considerable disadvantage, though that may yet change. The rivals have yet to face off on national television. Biden may still lose his advantage.

Less heartening, at least for those who yearn for national stability, is that neither candidate will accept the results in any conventional way. Trump has already said he will not quit his White House “home” until he’s satisfied he hasn’t been robbed, a process that has no timetable. Powerful Democrats, including 2016 loser Hillary Clinton, have already urged Biden not to concede if Trump is reelected, no matter what the tally.

How might these rumblings play out? Let’s first set the scene, for a moment pushing aside COVID-19 (the elephant in every room), which has acquired enough political radioactivity to set off a dozen atomic bombs.

First up is Trump, who finds himself in serious trouble in many of the states vital to his campaign. Combustible in the best of moods, Trump is trying to play catch-up among non-diehard loyalists who have come to see his my-way-or-no-way approach, mercurial four years ago, as a liability in a country that has become, all at once, economically fractured. Since the virus surged, Trump has behaved like a wounded animal who knows only to portray his adversaries as socialist radicals who openly defy law and order. Richard Nixon used this same approach in another ugly year, 1968, winning only because a third party segregationist candidate captured the once-Democratic south.

If the election results prove even remotely close in the battleground states, count on Trump to challenge the results.

According to Trump, he is blameless, fearless, and governs ably, notwithstanding relentless vilification from “fake news” mass media. The virus he calls “the China virus,” as if to impose a certain remoteness on this inconvenient mess.

The Democrats have tried to offset Trump’s predictable finger-pointing by settling on the retread Biden, hoping his moderate, inoffensive manner might help poach support from disaffected Republicans. Biden is no radical, nor is Sen. Kamala Harris, his running mate. He does, however, have to reckon with the strong voice leftist Bernie Sanders has accumulated within the party. Trump has already tried to portray Biden as an agent of the demonic, speed crazy Sanders.

So far, the assaults haven’t worked, mostly because smarter voters are aware Sanders still sits on the fringes of his adopted party.

Until COVID-19 made its landing (and went on to dominate all debate) Trump’s chances of retaining the presidency seemed more than plausible. His economic management sprung no major leaks, and, despite seemingly constant chaos in his inner circle, he fulfilled two campaign pledges, building a border wall with Mexico and punishing China for its sundry commercial transgressions. He also broke with climate change advocates and restored longstanding enmity with Iran, which Barack Obama had briefly brought under control through a controversial nuclear deal.

Though he has not yet dismantled Obama’s health care program, he’s chipped away at its provisions with zeal. He also made good on a promise to uphold the autonomy of the states, leaving virus control up to governors, a remarkable decision in the face of what many deemed a federal-level emergency if there ever was one.

But it was his sagging moral architecture, seemingly built into his very genes, that led to his House impeachment and later acquittal in the Senate. To say he exacerbated the partisan divide understates the tone of the ongoing hostilities.

Trump’s brushing aside of the virus failed to account for its growing impact on the national psyche, and his enemies quickly seized a moral high ground they have not relinquished.

Yet Trump acknowledges none of this, blaming all missteps on opponents and miscreants, a tendency veteran Republicans have come to loathe.

From a position of relative strength, bolstered by liberal-allergic loyalists who wish to send a message to Washington to beat back polling odds, Trump has lost traction as the bullying savior. His resistance to remorse after racially charged police murders led critics to accuse him of pathological indifference to civil liberties (once again, very much in the Nixon vein). This cauldron of circumstances, some of his own making, others not at all, now find him trailing a nearly 80-year-old rival, who, if elected, will make Trump the first one-and-out president since George H.W. Bush in 1992.

In Trump’s eyes, losing to “Sleepy Joe” Biden will be to lose to a loser, and worse still to a loser in his twilight, since Biden tried and failed to secure the Democratic nomination decades ago and eventually settled on two terms as Obama’s nice-guy No. 2.

From someone as vain as Trump, such a loss would be irreparable in terms of how he styles his legacy, and such things matter. In fact, many presidents live to bask in the glow of two terms served (behold Obama’s strut).

Worse still for Trump, he spent much of his often-mocked 2016 campaign maligning Obama while calling direct adversary Hillary Clinton a criminal: both are still Democratic Party linchpins.

In a word, he can’t lose, at least not to any member of this Democratic tribe, one that has always conspired against him. To be forced to admit such a defeat collides with the intimations of collusion and conspiracy he spends much of his time weaving, and believing. Trump’s pride and self-vision is no ordinary one and has always struggled to concede both public and personal reversals. To handle such reversals he has lawyers, many of them.

Polls suggest a tight race with Biden, for now in the lead, an advantage more pronounced nationally than in the critical swing states.

If Trump were in fact to lose, and lose big, he might be advised to concede.

But this is improbable at best and the very nature of this election, which, because of the virus, will take longer to unfold, may end such traditional endings. Then there is Trump’s own disregard for such traditions, seen as diplomatic constructs of corrupt Washington.

Anything less than a decisive Biden win will almost certainly trigger a four-alarm summons to legal brigades, and these legions will come readily to his aid.

Trump is no fool. He knows he’s trailing by enough to make things tricky. He’s already dropped hints about vote rigging and assorted subterfuge. He’s livid at the flack he’s taken from the likes of “CNN” and the “New York Times” — theirs is a venomous fight — and livid that his handling of “the China virus” has undone “his” economy and come to work against him. Not even stridently conservative Fox News has done much to rally on his behalf.

Trump will under no circumstances simply give a farewell speech and skip town.

He is Trump Agonistes, forging ahead despite persecution, a self-image well-suited to a family-business entrepreneur who’s endured bankruptcies and Manhattan-elite ridicule before he was able to vindicate himself against all odds, beating politicians at their own game (he was right; they, a gaggle of nattering scoffers, were wrong — with a stream of exclamation points).

Far-from-CNN states such as Florida and Pennsylvania, Texas and Ohio, states he took from the too-smug Clinton, states he believes will again rally behind him, demonstrating the weakness of polling.

So far, though, many voters in these fiercely contested states seem far less disdainful of Biden than they were of Clinton, not a hopeful augury.

What then to expect? A race in which neither candidate admits defeat, and both announce they will challenge the results. Trump more zealously, as he’s been working toward such an end for months.

A legal challenge could be launched in several states, not just one, as was the case in 2000 when George W. Bush and Al Gore fought over Florida until days before Inauguration Day. This could last months.

Recount precedent is on Trump’s side, with the country by now at home with its own litigiousness.

Such a strategy, even if Biden is eventually declared the winner, would further disrupt an already chaotic national scene and push Democrats away from crowing, already an all-in celebration in the making. A defeated Trump could seize the spotlight, reality show-style, muddying any and all transition plans.

Then there’s the matter of the voting itself, likely to be carried out by mail, yet another invitation to legal challenges and recounts. Mailed ballots, or reduced hours and personnel in polling stations — details that would produce challenges in the best of times — will give lawyers additional leverage. Given existing public health realities, the means of resisting voting results are literally endless.

The least likely event is a narrow Biden victory followed by a tidy and respectful Trump farewell (unless, that is, Trump undergoes an eleventh-hour spiritual transformation). A narrow Trump win would see the Democrats roll out their own team of attorneys.

For now, the sides are busy sending hate mail to each other, a pattern likely to continue for the duration of the campaign. The presidential debates, whatever their format, will no doubt find Trump in rambunctious form. Biden will have to handle the baiting better than Clinton, who all but shrugged Trump off in annoyance. Clinton’s high-mindedness cost her dearly.

For those who consider 2020 an aberration and believe in in an America of mornings-after, disappointment will take hold fast. And within weeks the names of high-profile attorneys whose names America never knew will make headlines, and wages, that will further gut-punch an unemployed nation whose dreamy days of Manifest Destiny are over, this time for keeps.