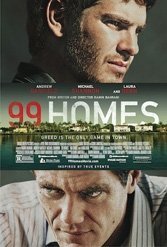 Many are the stories of good young men forced to sell their souls to regain favor from the fickle American Dream. Director Ramin Bahrani’s version is particularly poignant (and relevant) because it targets the aftermath and human cost of the U.S. subprime mortgage crises, precursor to the 2006-2007 Wall Street downturn from which there’s been no full recovery.

The brilliant Andrew Garfield is Dennis Nash, a handyman and construction worker who lives with his mother (Laura Dern) and young son Connor in their modest Orlando, Florida home. The year is 2010. Evicted by Richard Carver (Michael Shannon, perfectly cast), a shrewdly unscrupulous realtor and court-appointed foreclosure man, Nash will do anything to get the family home back — including going to work for Carver, who it turns out runs a variety of schemes and scams to bilk money from federal housing agencies (“I made more money during the crash than before…”) Suddenly in Carver’s good graces, Nash is on his way to recovery, but only by having veered into desperately muddy waters. And there will be dire consequences.

Bahrani’s portrayal of the harrowing and humiliating act of eviction is ruthlessly unsentimental. So is his gradual burrowing into the psychic and physical violence that lurks beneath gun-rich Florida’s retirement heaven veneer. If home is where the heart is, hearts are broken repeatedly, and pride crushed with it, a risky business among humans.

Most interesting, though, is Carver. He’s ruthless, yes, but insists, at times persuasively, that his U-turn into amorality came because banks issued bad loans and the federal government turned a blind eye, giving sharks the scent of blood. “I’m not an aristocrat. I wasn’t born into this,” he says. “My father was a roofer.” The tense and ambiguous relationship between self-made crook and Faustian victim isn’t as clear-cut as it seems, and that’s the film cutting edge, as well as its core power. It’s also a fine case study about the nourishing power of greed, both Carver’s and Nash’s, since it is Nash who allows himself to be transformed into that which he hated — child as father to the man. “Is it worth it?” Nash asks Carver, poking at ethics. “As opposed to what?” is Carver’s stone cold reply.

This is a valuable piece of filmmaking dedicated to the late film critic Roger Ebert, who was a Bahrani fan. He would have appreciated both its seriousness and depth of purpose.