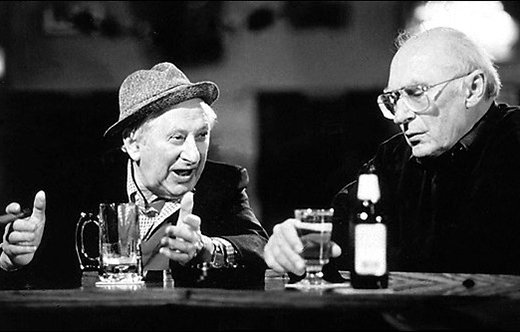 Writer and radio personality Studs Terkel, left, in conversations with legendary Chicago columnist Mike Royko in the 1980s. Terkel died in 2008 at 96.
M

y 93-year-old friend and former editor has taken to reading about the composition of the universe. He tells me chaos theory is not chaotic but random. He’s perplexed by the work of a theoretical physicist who insists the universe is but an infinite satchel of pebbles without mission or purpose, since pebbles have none that’s known. He ponders the unknown as if his job is to shovel his brain with enough of it to take into any respectable hereafter. Particles have no purpose but themselves, he tells me, which makes them remarkably similar to human beings, if somewhat more taciturn.

I get his musings from time to time when I call the Unites States to see how he’s doing. We met half-a-century ago in Rome and now he lives alone (his companion died two years ago), in a small Wisconsin hamlet from the city life that suited him ideally for decades. “As a pebble I prefer the land,” he says.

His age doesn’t stop him from weighing in on the events of the day. “That Boeing that crashed in Ethiopia, which has grounded the fleet, that was pure Kipling.” By which he means that few would have paid such focused attention had the victims been Kenyan or Ethiopian and not almost entirely European and North American. “Dead Africans you blame the pilot, dead white people and something’s got to be wrong with the plane.” It’s a fair point, but imagine saying it in mixed company, in New York or in London: you’d make few friends.

He’s a fan of the prime minister of New Zealand, who chose a uniquely symbolic response after a rightist terrorist murdered dozens at a Christchurch mosque: she vowed never to utter the assassin’s name in public. “That kind of thinking, erasing instead including, doesn’t suit the agitated mind.”
Banishing a name, he says, offends self and celebrity, vexing the outrage-hungry human grain.

Grains, not just one, inform his new obsession. Grains and pebbles and particulates standing in for self-important humans, who place in what’s known as the universe is very likely minor. Exceptional perhaps, but minor. He likes quoting Kafka: “The meaning of life is that it ends,” and he does so very cheerfully if not inquisitively, “because someone my age doesn’t have too many plausible directions left.”

Once, in Rome of the mid-1970s, we’d have lunches with hefty carbonara and wine (I’d abstain), and the entire lunch group would return to the newspaper office buzzed, and ready to edit and write headlines. “In vino copy,” he’d say. He taught me that the sentence “the reason is because” was rotten, since a reason concerned cause, so the choice at hand was between “the reason is that” or “because,” not both. A reason could have only one grammatical master.

He was once an avid fan of science fiction, swearing by the surnames Dick and Bradbury. No more, he says, because science fiction has run aground, stalled by recycled superheroes and plebeian stories that don’t get around to the role of human debris that lays in the cosmos, another homage to particles, particulates and whether their gathering can really be called a whole.

“I don’t say this to my plumber because he’d probably call 911. He likes talking about Trump, so I do that: another side to the alternative universe discussion.”

His town is filled with religious folk who insist he’ll meet his wife again “on the other side.” To which he plays dumb, since in later years they were all but estranged. “People like neat packages and happy endings, as if life and death were just a matter of different sides of the same mall. The parking’s free, and that’s what matters.”

My friend asks me if Italy has changed. He’s read about populists and demagogues and poor garbage collection. “Sounds familiar,” he says, and I agree. Younger mammals, same habits.

As for “the rest,” as he calls it, he believes people are living too long. “Too many people like me around, people who are pure past. We all need to start dying younger and give the planet a break. We should call dying an ‘exciting new frontier in leisure,’ turn it into a trend!”