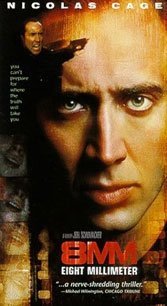 The high point of veteran director Joel Schumacher’s capable thriller sees the film’s narrator, a private investigator named Tom Welles (Nicholas Cage), unmask the vicious pornographer he’s been hunting for months. He finds the plainest of men. “What did you expect?” asks the pornographer. “A monster?”

Thus Welles agrees to enter the unvarnished side of L.A., and what he comes up with proves that sex and murder are in fact still entwined, at a price. Overall, it’s gripping descent that Cage handles deftly, taking cues from Gene Hackman’s portrayal of a troubled eavesdropper in Francis Ford Coppola’s “The Conversation.” In hell, bad corrupts even the good. But what unfolds as a mystery eventually collapses into a kind of vigilante movie that depends on cathartic violence to make its point.