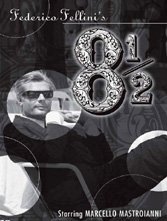 This is Fellini on the drawbacks of fame. Not just his own — the movie is obviously autobiographical — but for all those accursed enough to call Italy (and Rome) home. 8 1/2 hauntingly clarifies corruption, patronage, raccomandazioni, the mean and flattering complications of being a big fish in a small pond. The big fish here is director Guido Anselmi (Marcello Mastroanni), tapped out and weary after a string of hits. He’s hiding out a terme, or spa without a clue about his next story line. The man of the moment is, typically for Fellini, a kind of psychological nowhere man riddled with doubt, addled by women, besieged by sycophants, in awe of envy, greed, and compassion.

Insomma, Fellini’s amoral Italy then as Berlusconi Italy’s now (Berlusconi, like Anselmi, makes a bemoaning art form of the pressure he’s under). But unlike the 21st century prime minister, the mid-20th century director seeks solace in the secret life of dreams. On that planet, lust, caricatured Catholicism — cardinals become scowling trolls — and nostalgia make up a passion stew. Sandra Milo, Anouke Aimée, Claudia Cardinale as the women in Guido’s life — mistress, muse, wife — are Fellini archetypes. So is the prostitute from his Rimini youth (“La Saranghina”).

Women save you until you wake from them. Before Rome “lostness” was institutionalized into a kind of decrepit exasperation, you had Fellini and his vibrant reveries. Foreboding as a form of hope. Roba d’altri tempi to be sure, but what times they were!