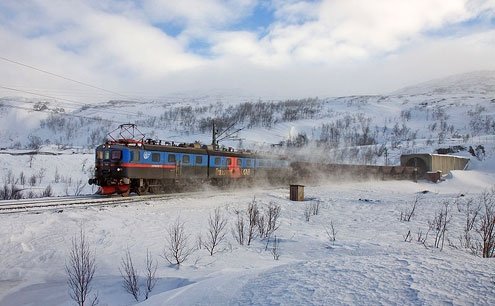 In northern Norway, transit can take on a harsher meaning.
T

o get back to Rome would take 74 marathons. It’s a mantra I repeat often when the cold and the arctic darkness conspire to snap at my bones, which happens often in Setermoen. Winter made its way to arctic northern Norway months ago.

The sun has sunk so low that it no longer even rises above the mountainous landscape surrounding my village, population 2,500. And, as in a Ray Bradbury novel, next few months promise only a few meager hours of sunless, bleak light, leaving us pale-faced inhabitants silently screaming for the sun.

Seventy-four marathons, I tell myself, as if I actually knew precisely what that meant. I’ve only ever done two. Does it mean that if I run 74 marathons my reward will be a return to Rome? Or do I mean it more metaphorically, that sufferance and struggle must be endured in order to return? The question remains unanswered, but it’s been a semi-useful crutch to help stave off the worst gushes of my bipolar condition.

The problem, as seen from Norway, is that I still have dusty, dirty, every-day Roman life pumping thickly in my veins. I still have noise and chaos roaring inside my head and I’m struggling to adapt. I have become the pathetic patriot of a country that isn’t mine. Fool that am I, I sit ridiculously alone in my snow-covered car, bug-eyed with sloppy tears, listening to Gino Paoli and thinking back on the bathed-in-sunlight runs I took in Villa Pamphilj.

In this neck of the bipolar woods, all the small sensual eating pleasures that symbolize warmth and sunlight are expensive and wrapped in cellophane. The little packages of fruits and vegetables have bravely been ferried north in big lorries. They seem like distant cousins from their Italian family, so deflated and depressed they seem to have retracted so far into themselves that they taste of nothing. Saddest of all are the twice-removed cousins of the Italian peach. They are cold, hard and frigid as they lie passively in plastic caskets, tempting no one but the truly desperate

Living in Rome wasn’t easy, but living in a Vitamin D deficient part of the world has humbled me. We, a family of four, came to Rome from Oslo five years ago firmly believing in its social services. But upon arrival I got a crash course introduction into a public health care system – as the baby in my belly grew during the first year of our stay.

We waded deep into the waters of chaos as we learned about the trials and tribulations of having our children attend Italian state school. We quickly learned how to maneuver through the city with kids but without a car. We fought hard to understand and adapt to an Italian lifestyle. We spent four years struggling to learn the language and working to understand the city’s quicksilver mentality. Worst of all, we struggled with the impossibility of not being able to plan ahead in a shift-shaper of a city, where all things public are worn down, exhausted, and, more often than not, on strike.

But we did adapt. We had to, even though there were so many times that we ached for clarity, simplicity and a Nordic sense of logic. We became accustomed to a life of confusion, paradox, and backbreaking effort. Our stay became an adventure that we enjoyed as much as you might enjoy a marathon — with an immense sense of accomplishment at taking part. What always kept us going, despite our exhaustion, was the generosity, love and surprising light-heartedness the infused our Roman lifestyle. We swapped Bergman for Fellini.

Aside from the smiles and salutations, the seductive lies and the devilishly charming tricksters, small details made Oslo seem like a stark world away. In Rome, we could enjoy the winter sunlight and the pleasure of having a wardrobe virtually free of itchy woolen tights and the high-tech rainproof, snow-proof outdoor all-in-ones necessary to cope with below-zero winter conditions.

We exchanged clean Norwegian air for smog, noisy traffic, the constant beeping of horns, and the cacophony of the dustbin men emptying overflowing rubbish containers at midnight. We swapped our fluent, clear and efficient, yet existentially anxious, Scandinavian lifestyle for a smelly, bumpy, lumpy nugget of dirty and golden humanity. And then, just as ambidexterity, agility and flexibility were becoming second nature, things — as they always do — changed suddenly. And we were flung to a much darker corner of the earth.

So laugh at me. Go on, mock me for my pseudo-patriotism, I’m too shriveled and light dehydrated to care. You go and take a deep breath of that delicious Rome smog, enjoy some soul-warming beams from the sun or the cute guy seated opposite you at your local bar. But rest assured that on the other side of 74 marathons, after toiling 3,018 kilometers away, I’ll be back in the ring for another Rome beating. All else is temporary.