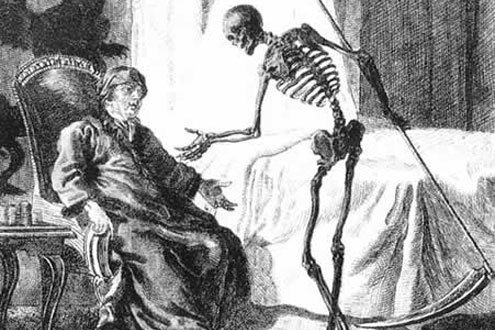 Death has long been portrayed as a beckoning.
I

have overseen three family deaths in three separate decades, my father in the 1970s, my mother in the 1980s, and my aunt in the 1990s. All three — ages 74, 66 and 89, respectively — died at cancer’s hand. Recollecting how they handled their decay suggests changing attitudes toward death itself, which has evolved from a deeply private and intimate inevitability into something far more public, a fate that should be at all costs be forestalled, postponed or medically prolonged as if prolongation was somehow redemptive. Minimizing or concealing decay can be seen as offensive, even selfish, since it denies friends, family and onlookers the opportunity to appropriate details from drama of deterioration to serve as personal props for a kind of reality show voyeurism. Even mainstream television journalism, which worked to shed sentimental shackles, has set aside the word “death” — an absolute — and returned to more childlike and euphemistic “passing,” a God-fearing 19th-century custom.

My father, when dying, found the idea of death as passage infuriating. He complained about the Italian habit of avoiding mention of cancer, often referred to as a male oscuro, or dark illness. He saw no passages and the pain he felt wasn’t dark but sharp and luminous. “I’m not afraid of death,” he’d tell me bluntly — I was 19 — “it’s the dying I loathe.” As I sat beside him over weeks, he asked me three things: protect him from prying phone calls; to not reveal details of his decay; to call specific people after he died, to let them know as a matter of fact. To make mortality into a fuss, he said wryly, was mortifying. It was too easy to imagine or appropriate the suffering of others. Let mystery be mystery, unadvertised.

My mother, though diametrically different in temperament, behaved similarly. Diagnosed with a terminal illness, she wept several times in one day — behind closed doors — and then stopped. “My little life,” she called her last months. But she’d be steeped in a strict upbringing that put discussion of mortality off limits. Decay was the ultimate intimacy, quintessentially personal and not to be shared. Even more vigorously than my father, she insisted on manipulating the information flow so that only very few people knew her condition. It helped her pretend what was happening was a dream from which she’d wake, and I was gladly complicit. She sought no reassurance, only privacy.

My aunt, a shut-in, spent decades bemoaning her coming death, only to stop the lament when death finally made a tangible play for her. She turned to reminiscence, in remarkable detail, of her teen years and her 20s, a rich delirium of half-remembered events that helped distract her from a suffering she’d long predicted but couldn’t imagine. She wanted no one informed until after her death – “And don’t tell anyone I passed, because I don’t drive.” Toward the end, she turned angry, vulgar, seductive and defiant. “Annoying until the end,” he doctor told me. But not bitter.

Death is an act of separation from the living that plays by its own rules. What mortality most needs is the space to be what it is, definitive. But advances in medicine and communication are increasingly camping out on that space, watering down or sentimentalizing the ultimately perishable by speaking of those in remission as “survivors” and emphasizing action verbs (“I’m going to beat this thing.”) The fearful healthy publicly manage the narrative of the dying to keep the fascinating vocabulary of agony in check. The sex and death paradigm, which once made talking too much about either taboo, has opened wide to the former to unconsciously create distance from the latter. Fending off decay — a process with an inbuilt paradox — is the opiate of the affluent, whose denizens hope genetic research will eventually yield the endless puberty known as immortality.

I once asked my ailing father, at 70, if he felt too young to die. He scoffed. What if instead of living 70 years man lived until 700? What if a dozen generations coexisted? What if the human prime was as substantive (and sexy) at age 300 as 30? The many what ifs produced a wry conclusion – if man lived until 700, the fretting and anxiety occasioned by the coming of the 690s would make his terminal 70s seem like child’s play. Imagine that, he smiled, and died a week later.