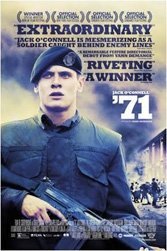 Let’s leave the superlatives aside for a moment, though London-based French director Yann Demange deserves a handful. Jack O’Connell is Pvt. Gary Hook, a 20-year-old soldier from the British Midlands called to serve in Belfast at the height of The Troubles, in 1971. “You’re not even leaving the country,” says his barking platoon commander. Wrong. He’s leaving the known universe.

Caught in brutal standoff with enraged Catholic civilians during a Belfast riot, Hook is suddenly separated from his mates and left alone to navigate a film-long nightmare sequence that involves fleeing the split IRA (hawks and doves), militant Ulstermen and lurid, British counterinsurgency units playing at agitprop. He’s adopted, sheltered and expelled by child soldiers and civilians alike. He’s a fugitive in an English-speaking territory that’s a glorified no man’s land inhabited by thugs and killers, mercenaries and redeemers, all of them in one way or another out to find him, to save or to kill.

O’Connell is typically brilliant but this isn’t his movie. It belongs instead to the merciless faces of the warriors that straddle the two sides, particularly kids and teens with guns. The brutality Hook ultimately bears witness to is off the books and decidedly un-British, part of Demange’s political undercurrent. What he’s seen, he’s told, was part of a “confused situation,” when in fact the only confusion is retribution and the evening of scores, standard bearers of all civil conflict.

This is as good a historical fiction made about the period because it omits heroes and discards bravery. Rage and betrayal make Northern Ireland of the time no country for young men, as it was. Sean Harris is particularly menacing as Captain Browning, local leader of the Military Reaction Force, which acquired a reputation as an anti-Catholic death squad.