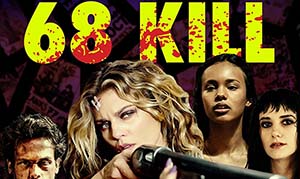 When your trailer park trash girlfriend tells you should stop shoveling shit and she should stop sucking dick, because, well, she’s sick and tired and crazy on the side, pay attention. Otherwise you, sewage-shoveling good guy, might fall prey to a scheme to rob 68 grand from one of her clients, opening the up the sloppy gates of Hell. The thing about veteran Trent Haaga’s screwball horror flick is that, clichés includes, it delivers on both its comic and horror premises.

Perfectly placid Matthew Gray Gubler (from TV’s “Criminal Minds”) is Chip, the hapless shit-slogger. Lynne McCord is Liza, his delightfully vicious and entirely loony girlfriend. Her wish that he steal, kill and fuck on command, he obeys, and that twist on the “who’s the boss” theme thrusts the movie into a twisted landscape in which girl power is nurtured by greed, lust and orgiastic self-importance.

The 68K acquired after a bloodbath, nice boy and bad girl hit the road, leading straight to Liza’s brother Dwayne, who dismembers women as a hobby. Sweet.

Chip, in over his head (you think?), decides it’s time to flee, fair enough except that there’s a kidnapped girl, Violet (Alisha Boe), in his truck and she, too, is tossed into Haaga’s Gothic blender of warped humor and female mayhem. Rarely does a script subvert sexual archetypes as gleefully as Haaga’s, and minus the buckets of blood it’s all in road trip good fun, the darkness too dark to ever take too seriously. “This,” says Liza to Chip, her face half-bashed in, “is not what I call a healthy relationship.” But it’s the very healthy timing of the whole that makes this a top-notch horror caricature. No matter how gory it gets (buckle up), you can’t but root for Chip, who just can’t help falling for girls.

“There would be less people in the prison system if it wasn’t for pussy,” Chip’s boss tells him early on. After which Haaga puts his skanky femme fatales on parade and proves the point.