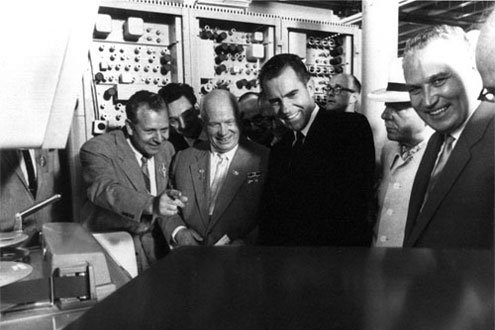 icture it. A dapper vice president and a squat Soviet leader arguing over the role of kitchen appliances and color televisions through a translator inside a model U.S. suburban home built to order in Moscow. Here was straight-laced Richard Nixon sparring with Vodka-powered Nikita Khrushchev inside the American National Exhibition in Moscow where in July 1959 the U.S. opened a pavilion to exalt the virtues of consumer capitalism.

Nixon: “The American system is designed to take advantage of new inventions and new techniques.”

Khrushchev: “In Russia, all you have to do to get a house is to be born in the Soviet Union. You are entitled to housing… In America, if you don’t have a dollar you have a right to choose between sleeping in a house or on the pavement. Yet you say we are the slave to communism.”

The grinning Khrushchev demanded to know if the American kitchen included a machine the “puts food into the mouth and pushes it down.”

If the scene sounds surreal, it was.

In those days, consumer capitalism still needed love. Soviet communism was the Brand X that wouldn’t go away. Sugarplum visions of that brand indirectly fueled American Beatniks and bikers, Holden Caulfield and Alan Ginsburg, eventually generating a full-fledged counterculture that extended into the middle class, thanks in part to the Vietnam War.

The existence of a competing system, albeit idealized, gave nonconformists a leg up on criticizing a possession-based society that seemed on its way to favored gimmickry over poetry. Khrushchev’s seemingly naïve harangues won over the dreamy. “Some things never get out of date,” he told Nixon. “Houses for instance, and furniture; furnishing perhaps, but not houses.” Supporting the Soviet view mattered less than the dialectics of the debate.

If Khrushchev’s old-school defense of communism seems comical 51 summers on, it also makes a case for every Rome needing a rival to remind itself why its slogans matter. In America, the gradual disappearance of Khrushchev-like admonishments erased ideological non-conformity, and with it social and civil disobedience. Civic identity then evolved into the loud and jumpy sum of desires and grievances mostly related to sexual predilection, health, political emotionalism, and an obsessive fascination for child-rearing.

Paraphrasing Khrushchev, the debate became about furnishings, not houses.

While concerns about domestic direction persist, they exist within a closed system. Capitalism’s basic tenets flourish unchallenged, with the overwhelming conjunction of data and its tools serving as collective tranquilizers.

Social docility is of course nothing new — dissent has always mattered less than securing and maintaining basic needs. But so-called American “exceptionalism” thrived most in the context of challenge and defiance.

If atheistic communism survived through censorship, propaganda, and the imprisoning of opponents — all pilloried as vile — secular capitalism coerces through commerce, albeit more benignly. Marketing, of things and self, is the opiate of post-Marxism.

Absent a competing system, rebelliousness struggles for meaning and dissent for focus. Art and literature find fewer takers because their imaginative realms are either not vivid enough or too remote from profit.

Reliance on irony, mockery and satire is widespread enough to imperil wit and eccentricity, arguably more subversive. For the laughter-immune, the panorama can be confusing and depressing, for which there’s medication. (“Here comes your nineteenth nervous breakdown,” riffed The Rolling Stones in 1965, hoping they were kidding.)

What poets, philosophers and theologians questioned most about consumer capitalism was its ability to do more than gratify. No one objected to better refrigerators, but skeptics wondered whether new toys alone could keep Americans from distracted complacency. Since most societies depend on competing systems to keep their core convictions fresh, what rivalry would supply the freshness in the event communism failed, as it did?

The question lost traction as purchase-oriented secularism went into full swing after 1990. Only Pope John Paul II among public figures warned of a creed built around purchase power and connectivity. But his worries were dismissed as those of an aging and conservative Catholic intellectual who preferred the Tower of Babel to the chatty vividness of the new day-to-day.

Islamic terrorism briefly galvanized a Crusades-style view of an enemy at the gates and fortified in-house convictions of virtuousness. But even that tendency morphed into a product line, security, which occupies several 21st century showrooms.

“Many things you’ve shown us are interesting but they are not needed in life,” Khrushchev insisted to house-happy Nixon in 1959. “They have no useful purpose. They are merely gadgets.”

Call Khrushchev envious and defensive, a forgotten representative of a discredited order. But Khrushchev need not have worried about the development of a machine that puts food in the mouth and pushes it down. It now exists.

— Here are excerpts from the Kitchen Debate.