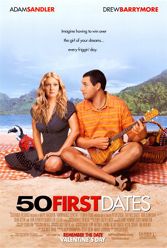 With all the trappings of a Studio City trifle, it’s a surprise to find such a lovable little film at the core. Adam Sandler is Henry Roth, a fish-curing marine biologist in Hawaii who falls in love with an absent-minded young woman (Lucy; Drew Barrymore) only to find out she suffers from a bizarre kind of short term memory loss. Each morning, she awakes not knowing what she did or how she felt the day before — and above all not recognizing Henry. This demands daily renewals of courtship rituals. Old pals Sandler and Barrymore are delicious in Peter Segal’s quirky romance. Rob Schneider has a wonderful time with Ula, Henry’s pseudo-transgender assistant.