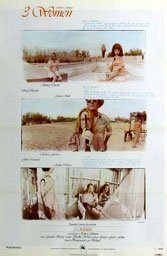 Shelly Duvall was Robert Altman’s muse, a hawkeyed string-bean with a moody face and a disarming smile. She’s the weird heart of this strange and lovely film about three women who live in an apartment complex in the California desert, the significance of their lives based entirely on the quivering, dream-like ties between them.

Everything simmers, like a balancing act that struggles to keep hysteria at bay. Millie is a triumph of gregarious and winning superficiality, at least at first. But gradually Pinky and pregnant Willie strip that thrall. Millie’s once-bubbly world turns into the chattering of teeth as benign roommates show quiet fangs. Men and parents drift in and out. Water, mostly in swimming pools, sloshes between the amniotic and the homicidal (Pinkie jumps into a pool from a high balcony).

But Altman’s camera stays on Millie. She’s the conventional one suddenly made aware of the world’s instabilities. The solid ground she knew begins to shift in favor of painter Willie, she of the reptilian, anthropomorphic murals (painted by Bodhi Wind). This is Altman dreaming in another gender, with men made into detritus. It resembles none of his other films. Duvall won best actress at the 1977 Cannes Film Festival.