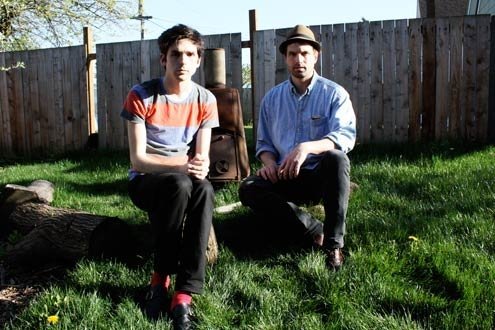 rying to tackle summer’s intense heat can take many forms, and each one has a soundtrack. Record temperatures can make trying out new sounds less of a luxury and more of a necessity. Oppressive days require cooling escapes.

A relaxed approach heat-beating comes from from Portland, Oregon’s Golden Retriever on their latest album, Occupied With the Unspoken (Thrill Jockey). Its calming reassurance has a way of offsetting oppressive days.

Behind Golden Retriever are Jonathan Sielaff (ex-Au) and Matt Carlson (ex-Parenthetical Girls), two veteran musicians with a long pedigree in experimental pop. Given the chance to jam extensively in 2010, they stuck with it and never looked back.

Golden Retriever traffics in long-form synthesizer-driven psychedelia. This album’s four mind warps is in keeping with the band’s work on previous albums and approaches the transcendent beauty of Robert Fripp and Brian Eno’s during their mid-1970s collaborations or Manuel Göttsching’s early electronic experiments.

More recent electronic free spirits like Boredoms, Fuck Buttons, early M83, and (in particular) Emeralds also come to mind. If those names strike a chord, Golden Retriever is for you.

If not, maybe you’d prefer the full-on assault of Bayonne, France’s metal maestros Gojira on their latest full-length, L’Enfant Sauvage (Roadrunner). Put aside any doubts about the ferocity of the music. The band is named for the original Godzilla movie and it toured as Godzilla until 2001, when it released its first album, Terra Incognita. Since then, there have been exactly zero lineup changes. Instead, the quartet has crystallized into a rhythmically tight, impressively consistent metal machine.

L’Enfant Sauvage (probably a reference to director François Truffaut’s 1970 film) is the band’s fifth full-length attempt. From the opener, “Explosia,” you know this is a band that’s still on top of its game. Gojira has always been more melodic than most death-metal bands (even as the helicopter kick-drum of “The Axe” rifles away, you can still make out a song to hum.)

At 11 songs and 52 minutes, there’s no shortage of music to get you going, or pummel you down. The title may mean “the wild child” in French, but make no mistake: the band’s sense of discipline and execution hews to a serious work ethic.

Antibalas Afrobeat Orchestra, a New York-based collective founded in a warehouse in 1998, have long served as informal missionaries for Fela Kuti’s memorable blend of traditional West African music, jazz, and dub, adding their own Latin twist to the sound with a healthy dose of Cuban funk.

Busy guesting on the albums of others and helping produce an off-Broadway play about Fela, their new album, long in coming, has fallen between the cracks. A half-decade wait ends in emphatic style with Antibalas (Daptone). Time spent in other projects has paid dividends — they haven’t sounded so invigorated for years.

Even more than their previous Security, this six-tracker relies on a life-affirming saxophone and catchy call-and-response vocals. Whereas Security tended to fall into a predictable groove that dragged on the more you heard it, Antibalas still sounds fresh several listens deep.

It’s also what makes Antibalas great. To hear a group that’s been around so long still make music as fun and fresh as when it started out makes for a different kind of enjoyment than listening to the power of Gojira or the lushness Golden Retriever. But in all three cases, and depending on taste, it’s cooling music for an otherwise overheated summer