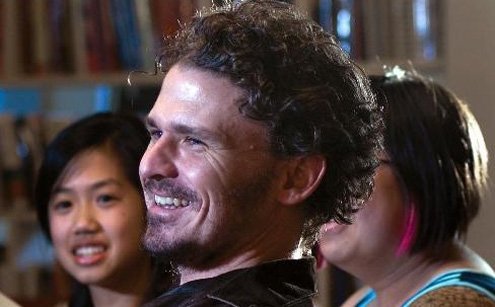 David Eggers: Why is this man smiling?
G

et ready! Issue 28 of Timothy McSweeney’s Quarterly Concern heads our way. Like the 27 forerunners it’ll dump hayloads of gags. About “this crazy world” we live in. On the serious: there’ll be a handful of honestly honed prose works, minus cant. One or two sharp-knifed reality bytes. And a sample taste of the McSweeney Empire.

Meanwhile. Warning to non-subscribers: don’t overguestimate your chance to get a copy. Because issue 28 of publishing magnate/writer Dave Eggers’ first brainchild truly prides: not sold by “large distributors.” On the other hand, in the up-yours McS world this claim does not need to be true. It may be a joke. (HA?) You just might find 28 at mega-bookies. Or Amazon.

For like its sequel media-siblings in the snowballing McSweeney Empire, Concern promises to be “funny without being humorous.”

But did you really expect PR seriousness? From an exercise born as parody of the staid book industry? (And purportedly titled after a stranger. A rovin’ guy, name of Timothy McSweeney. Claiming to be long-lost bro to Eggers’ Mom).

Now to those beginnings….

‘Twas a dark and stormy night…ten years ago. When Dave E. and a few friends kicked around some ideas. Like: the publishing industry is as old as horse dung.

We are grateful that these particular people finally noticed. For thereupon they setforth to produce fairly original lit mags. In order to ridicule the Arts Establishment. And maybe offer some good writing. At the start, however, simply beating on the treacle and creakle publishing hegemons was the main kick.

From day one, the counter-culture package has been the message. First number of T.M.’s Quarterly Concern revealed the McS addiction to Revered Notion dissing, bad gags and juvenile fun. It carried a ss printed along its spine. You get the idea.

That was 1998. The soon-to-flourish McSweeney Empire was born. A new-look takeover in the publishing industry.

It was the right moment. Eggers and his masthead of “friends and writers” appeared to a public tired of conventional presses. The McS just-folks language and direct-to-you tone paralleled the boom of Internet chat rooms, e-groups, bloggers. It encountered the new, participant generation. Ready for upcoming touchy-feely, chatty prose — as in MySpace, YouTube.

It was — still is — generation indifferent to ancientofdays cultural yardsticks. As McS writers often said: the NBA, the Booker Award, dutiful life itself… can all get “so effing boring.”

With this in mind, Eggers and his band of Effing Elves wrote their job description: “A small group that sells taxidermy equipment and also produces books.” That tedious fun got them the limited number of startup subscribers you might imagine.

However. Eggers himself is a deeply talented writer. In 2002 his “A Heartbreaking Work of Staggering Genius” conquered best-seller lists. Spurring interest in the burgeoning McS enterprise. Which demonstrates unlimited supply of tongue-in-cheek. And ambition.

Also NB: Eggers and Spike Jonze are film-making Sendak’s “Where the Wild Things Are.”

Total? Any McS production is an uncharted adventure. Clearly: McSweeney 28 is at your own reader risk.

Guaranteed: lots of jokies. And lists — oh how Eggers’ EE love lists. Where you get to learn that “Armless in Seattle” would rate in their “Bad Titles for Romantic Movies.”

THEN — drowsing into your third List, ready to toss the latest vol., wondering if there’s any way you can DEMAND your money back-you remember some past McS nugget. Found thru dogged patience. Like the (fictional) “Unused Radio Commentary by Howard Zinn and Noam Chomsky about a few Tolkein DVDs.” A small piece that pilloried Zinn and Chomsky for intellectual posturing and jargon. As sidebit, tossing satiric lightworks on the revered Tolkein opus.

What? Making funny about the Authoritative Tolkein Wonderland? About its sanctified treasure trove of Wisdom, Knowledge, and Moral True? Heresy, you say? Yet as fictive Z and C note: the Master does “make the powerful feel very good about the kind of things they’ve done to less powerful societies.” His world view being “vaguely reminiscent of the biomechanics of National Socialism.”

That’s Eggers’ Effing Elves speaking. Their too rare, but uniquely devastating alternate-take, live shots are what the McSweeney Empire is all about. So try to get your mitts on 28. Otherwise you really might be missing out… on that occasional fierce McS breakout. When it comes, it’s as though the prison walls had just fallen.