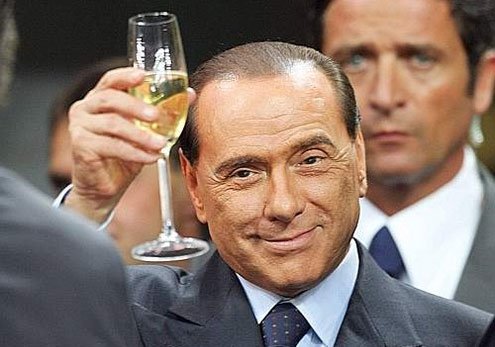 Berlusconi: Facilitated by those who swore to stand united his way.
T

o North Americans, Italian politics is contaminated by complication. But getting a handle on Prime Minister Silvio Berlusconi’s latest burst of studio-boss impunity isn’t hard. A true boss has no rivals, which in turn begs displays of condescension to the subaltern.

Did he use state aircraft to ferry guests to his Sardinian villa where they cavorted half-naked? What if he did? Official use is discretionary and the discretion is his. Did he consort with a teenaged girl who could be his granddaughter, as his wife suggests? No. His wife should apologize. Should Milan and other Italian cities accept multiculturalism? Hell no. The increasing presence of “non-Italian citizens” makes some Milan neighborhoods seem like “you’re not in an Italian city but in an African one.”

Reams have been written about Italy’s political feudalism and its chronic resistance to innovation.

Yet Berlusconi 2.0 is anything but cliché’s favorite son. His bravado reflects two years of political upheaval that have transformed Italy into a state without a credible opposition.

From 2001 to 2006, Berlusconi’s Forza Italia party ran Italy with lukewarm but loyal support from the rightist National Alliance (Alleanza Nazionale) and Northern League (Lega Nord). He rose to power for the second time when Italy’s main leftist parties, marshaled under the patchwork Olive Tree coalition headed by former Rome Mayor Francesco Rutelli, fell afoul of awful management. In May 2001 national elections Berlusconi’s House of Freedom alliance beat back the Olive Tree with both sides polling more than 40 percent of the vote.

This led to five noisy years of center-left dissent, with moderates and radicals hammering away at Berlusconi’s grossness and gaffes. Anti-Berlusconi subculture thrived as a kind of life method.

Eager to regain power but unwilling to chance another maverick (Rutelli had failed to gain traction), the 10-party Union of 2006, the Olive Tree’s successor, reluctantly gambled on former Prime Minister Romano Prodi, a professional economist who had already defeated Berlusconi in the 1990s.

Prodi, staid and unflappable, did his part. In televised debates, Berlusconi baited him without luck. As Prodi lectured, Berlusconi babbled, desperately at times. Prodi seemed suddenly cool and “presidential.”

Prodi’s bulky Union won, but barely. Two-speed election laws gave Prodi a wide majority in the lower house, the Chamber of Deputies, but only a one-vote margin in the upper one, the Senate.

The future of the anti-Berlusconi left, Prodi observed wisely at the time, hinged on keeping the fragile center-left partnership intact long enough to establish viable leadership.

Italians don’t come around quickly. The left hadn’t governed for nearly a decade. It was vulnerable to mishaps, and to itself.

Berlusconi meanwhile did all he could to divide the majority. Prodi’s every day was a sufferance. Within his coalition, radicals disparaged centrists who in turn deprecated extremists. The strife grew as unappetizing as Berlusconi himself.

The first Prodi government collapsed over foreign policy; the second over a personal spat Berlusconi not surprisingly helped trigger. The first failure was punitive, the second lethal. The left was again doomed by cannibalism.

By early 2007, Prodi was a lame duck and the stage was set for the little chief’s re-entry. The new Democratic Party, which replaced Prodi’s broken Union, put electoral rookie and former Rome Mayor Walter Veltroni up against Berlusconi’s oar-pulling phalanxes. Veltroni, a confused centrist, had precious little time to prepare a campaign and no experience in running one. It was a mismatch.

The ensuing landslide definitively demolished the anti-Berlusconi front. Legions of leftists gave up on the feasibility of opposition. Several leftist parties disappeared, failing to earn the necessary four percent for national representation. It was an abnormal surrender, an ideological and moral retreat that confirmed the left’s dependence on anti-Berlusconi opportunism — something Berlusconi himself counted on. Nothing exalts a vain man more than knowing he’s the center of attention.

Cynicism followed. A country gets the leader it deserves, rued disillusioned opponents. And Italy deserved Berlusconi.

This was tantamount to November 2004 American Democrats resigning themselves to post-loss emotionalism and hitching to Canada. They didn’t, of course, and Barack Obama turned the tables.

Berlusconi was quick to smell the extent of the defeatism. Instead of resting on his laurels, he merged his center-right with the hard right, creating the B-movie named People of Freedom. He then forged deeper ties with the Northern League, veteran bigots who have used the economic downturn to make muscular inroads (hence Berlusconi’s recent criticisms of multiculturalism).

While the broken left sulked — and still sulks — Berlusconi forged a juggernaut (at least by Italian standards) that will likely go unchallenged until he withdraws from the active political scene.

His recent, near-comic book forays into narcissism are equal and opposite responses to the left’s depression. Veltroni is long gone, replaced by Dario Franceschini, a pleasant but anonymous leader who has yet to make a name for himself.

Berlusconi’s once- or twice-a-year gaffes and scandals now occur monthly, with few paying systematic attention. Recent European elections, notable by absenteeism, confirmed the trend. Berlusconi and the Northern League together topped 45 percent. The mainstream left remained stuck at well under 30.

New York Times correspondent Rachel Donadio, in an astute reflection on Italy, among the better ones in recent years, said of the latest Berlusconi era, “there is no ideology and no network; there is only Mr. Berlusconi, and you are either with him or against him. Compared to the old order, Mr. Berlusconi’s political class is seen as a modernizing force.”

But there is no ideology because the final ideology was a plebiscite on the legitimacy of Berlusconi himself. A stale and neurotic bunch in general, Italy’s leftists now can’t see beyond their own disenchantment.

Berlusconi, in turn, leads a one-track government uncluttered by feasible challenges. The unencumbered boss can now produce better and more copious personal drama, which at 72 he still does with incomparable Latin verve.

Berlusconi’s “unstoppable success” — Donadio’s phrase — was not only made possible but facilitated by those who swore to stand united his way. He now rules sloppily among the grumpy vanquished, bequeathing a choice between sycophantic deference and Zoloft.