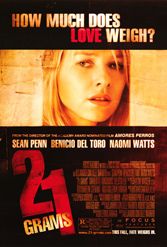 This is exceptional because it is agony perfected or exceptional agony because such trembling can only be lived, and not committed to film — at least not without resorting to ambitious manipulations. Either way, director Alejandro González Iñárritu’s movie (he was behind “Amores Perros”) is draining and dances on the razor’s edge between beauty and melodrama. Cristina Peck’s husband and two daughters are killed in a car crash caused by Christian ex-con Jack Jordan.

Meanwhile, mathematician Paul Rivers, dying of cardiac failure, receives Peck’s husband’s heart. The people and their broken pieces are gradually sewn together, though the three-story narrative is sheered. Naomi Watts as Peck, Benicio Del Toro as Jordan, and Sean Penn as Rivers are all drop-dead sincere, and persuasive. Twenty-one grams, by the way, is the alleged weight (probably apocryphal) of a soul’s mass.