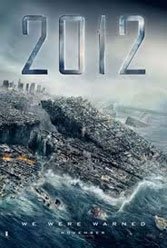 Roland Emmerich’s last big-time camp apocalypse, “Independence Day,” benefited from human life rafts by the names Will Smith, Jeff Goldblum, Bill Pullman and Judd Hirsch. Amid aliens and world-burning bonfires, they dabbled in caricature to overcome obvious plot limitations. And lo and behold from time to time it worked. But this apocalypse gets no comic help and Emmerich flails. Comic book phrasings are everywhere but there’s nothing but black Disney effects to save it from its omnivorous self.

When a government scientist (Chiwetel Ejiofor) learns that the overexcited sun will melt the planet’s core in 2012 (fulfilling Mayan prophesy, by the way), earthlings are force into paroxysms of rushing around. The chief rusher-around is a divorced writer (John Cusack) who begins to believe the ranting of an AM disaster preacher (Woody Harrelson) who’s not only on to the end of the earth but a secret government project to build arks that sells salvation places to the highest bidder. Eat your heart out Noah.

When no discernable plot threatens, Emmerich gets the effects going and the world is soon all toast and water. Meanwhile, author rushes to save kids and ex-wife (Amanda Peet), with the understanding of her new partner. Meantime, Russians, tidal waves, and giraffes make an appearance.

Don’t be afraid; it all ends well, at least when it comes to sentimental uplift, which for Emmerich is tantamount to survival of species. As for survival of the movie, that subject is best left untouched.