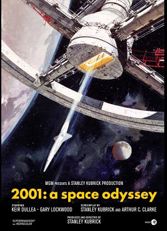 A space thriller that’s at least a few centuries ahead of its time and flips the “we are not alone” theme on end to place pan-galactic humanism where monsters usually lurk. Lunar colonists find a suggestive monolith with no apparent origin. A latter-day Rosetta Stone that trills, it lures a manned expedition to Jupiter. As the astronauts approach the source of the signal, all “human” order decays. The infamous HAL-9000 computer (Douglas Rain‘s haunting voice) turns recalcitrant and homicidal. It’s left to Dr. Dave Bowman (Keir Dullea), the only survivor, to approach the floating, door-like slab — accompanied only (and memorably) by the scraping sound of his own breathing. The key to the Dalí universe, it turns out, lies in the kaleidoscopic folds of human self-awareness (no surprise, since the idea is Arthur C. Clarke’s).

Though working in a pre-digital age on a canvas of then-unimaginable proportions, cinematographer Geoffrey Unsworth, special effects genius Douglas Trumbull, and director Stanley Kubrick knew to manipulate the commonplace: music and light. Scenes of a Pan Am shuttle headed to the Moon with Johann Strauss’ “Blue Danube” pacing the journey are incomparable.

Not a thing created in the post-“Star Wars” period — however sophisticated — approximates the theatrical clout of Unsworth’s best scenes. That’s because the ambition of his visuals were literally unprecedented, an overused word that here applies in all its glory. A masterpiece, no matter what you think it says (or fails to) about the human condition. Few dream this big and have so much to show for the journey.