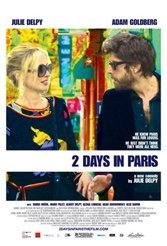 Good intentions aside, Julie Delpy’s debut as a writer-director has painfully little going for it except perhaps unappealing candor. Marion (Delpy) and Jack (Adam Goldberg) are “back” in Paris (it’s Marion’s hometown) ostensibly to affirm their casual but earnest coupledom. In the first 20 minutes you learn that Marion’s glad to be home, sort of; that Jack doesn’t like her apartment or appreciate poor European water pressure.

Goofy-glasses Marion has most of the heavy lifting. After all, she’s the one who’s Americanized herself by hanging out in Jack’s New York. This permits Jack to behave boorishly, like a dour Woody Allen caricature, which is apparently compensated for by Marion’s French handful of former lovers, who make Jack insecure.

There’s a sense that Delpy, taken by her French girl role in Richard Linklater’s punchy “Before Sunrise/Sunset” duo, felt somehow compelled to deliver her own wordy (and considerably more prosaic) look at how no-frills men and women really get along, or fail to, and how truth is easier to announce than make good on. Fair enough.

But the script struggles to get past adolescence, which may be Delpy’s backhanded assault on American frat boy maleness. To wit, Jack, convinced he’s sick, finds a thermometer, which he decides to suck on. Marion gently suggests he’s placed it in the wrong orifice. Jack: “Are you 5? You still use the thermometer up your ass?” Condom arguments ensue. Is or is not Jack’s prized dick too big for French condoms? It’s his ego that too big, mopes Marion.

Sorry, kids. All this information does not a gripping movie make.