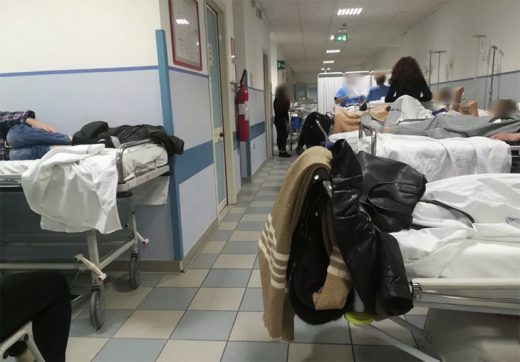 Halls can be fair game in overcrowded Italian hospitals.
M

y patient Gayle lived hand to mouth with an Italian mechanic boyfriend, her sole income selling homemade preserves at the weekly village market. She decided to consult me after giving up on her National Health Service General Practitioner: she’d been experiencing gnawing abdominal pain for months, then started having bloody diarrhea. It was obvious that she needed a colonoscopy to figure out what was going on, and fast. But how was she to get one?

Her local public hospital had an eight-month waiting list, and she couldn’t afford €900 to have it done in the private clinic I usually recommend. Gayle asked around and found a cut-rate private operator who quoted her €250. I turned thumbs down at her doing such an invasive procedure with someone I didn’t know – I’ve seen too many colonoscopies gone wrong. In some cases, a doctor got only halfway up the colon, leaving polyps in place instead of removing them. In others, needed biopsies were omitted. In a few, a doctor poked a hole in the bowel.

I’ve seen too many colonoscopies gone wrong. In some cases, a doctor got only halfway up the colon, leaving polyps in place instead of removing them. In others, needed biopsies were omitted.

Next I asked my trusted gastroenterologist colleague whether he could get her hospitalized on the public ward where he worked. He rolled his eyes and told me his hospital was so short of beds that an ulcerative colitis patient of his was parked at that very moment in the Emergency Room hallway with a high fever, passing bloody diarrheal stools every hour. In the meantime, still no bed in sight, the patient was getting no treatment at all. There was no chance that my patient, who was sick but not at death’s door, could get admitted. For decades, there’s been a tug-of-war on between full-time National Health Service hospital doctors who want to supplement their salaries with private practice, and governments that aim to keep public medicine strictly public. An uneasy compromise lets hospital docs see paying patients, but – theoretically – only inside the hospital. This has been dubbed intramoenia, Latin for within the walls. If you get a colonoscopy in the public system you’ll pay next to nothing, but unless you arrange it a year ahead of time you’ll feel every painful twist of the tube.

If you do your colonoscopy privately in the same hospital, with the same gastroenterologist, in intramoenia, an anesthesiologist will be glad to knock you out for the duration. In their battle to hold on to outside offices, the physicians have found strange bedfellows in the left-wing hospital workers’ trade union, which opposes on principle the mixing of public and private medicine on hospital grounds. Both groups have been appeased by a sleight-of-hand redefinition of “hospital grounds” that can stretch to include offices anywhere in town. In the case of Gayle, my trusted colleague eventually came up with a splendid solution: he referred her to his own trusted colleague who did the exam on intramoenia three weeks later for €450, about what Gayle and her boyfriend could scrape together. The diagnosis? Crohn’s disease, which, having been identified, could be treated perfectly well in the public system where she doesn’t have to pay a penny.

Much of my professional life is spent helping patients run this kind of daily slalom between public and private medicine. For better or worse, it’s a job in its own right.