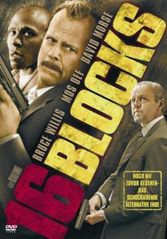 Director Richard “Lethal Weapon” Donner’s fingerprints are all over this implausible but entertaining story about a burned-out cop (Bruce Willis as Jack Mosely) assigned to drive bad-cop whistleblower Eddie Bunker (Mos Def) 16 blocks to a New York grand jury appearance. Corrupt cop ringleader Frank Nugent (David Morse) wants Eddie dead and all hell breaks loose. Donner flits between action flick and parody, with the weary Willis and motor-mouth Mos getting the dramatic acreage Donner gave Danny Glover and Mel Gibson once upon a time. It works. Willis lets hip-hopper Mos shuffle around with sweet slyness: He’s a felon who (what else?) wants to open a bakery. Morse, saddled with the usual villainy, does his bit. But it’s Willis movie, and he’s among the most sympathetic actors of his generation.