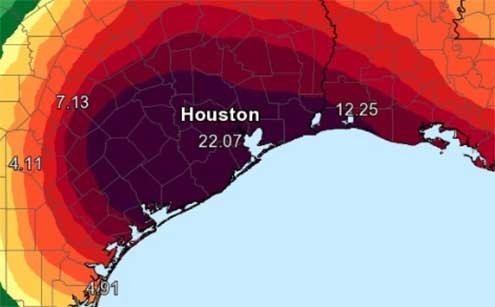 ot a month ago, they remarked – these august journalists seated at an August dinner table – how the summer had been tranquil, too tranquil in fact, too absentminded and non-visual. Calamity was missing and they were as bored as their five-alarm-fire industry, left to reckon only with a loudly misbehaving American president. Where was the plane crash? Where was the colossal terrorist attack? One of the brood spoke almost wistfully about a September day 16 years ago in which the destruction of two New York skyscrapers became the show to end all shows and the busiest nation in the world froze, abnegating what was left of its stiff upper lip.

So where, now, nearly two decades later, was an event mass media could seize on as its own, with weeping hordes and ravished lands, with intimations of more peril ahead? Sure, Kim’s North Korean nuclear barking had turned a few heads, but to what end? War? Unlikely, unless one of words. And how even to cover such a war if missiles were the weapons of choice?

What was needed was a dash of Malaysia, a plane vanished into thin air, voodoo-like, and then a second one shot down by militias roaming the border between Russia and Ukraine. For the veterans, nostalgia came in the form of Lockerbie, where in 1988 a Pan American jumbo jet blew up in midair, fouling Christmas. That was good stuff. Grieving families; lives cut short; a sinister adversary in Libya.

More marginal was the Haitian earthquake of 2010 ((yes, if it’s not Europe or America, it’s marginal). Yet who could argue with 100,000 dead and broken children pictured covered in flies? The camera loved them. Even cynics took the bait. As they did to some extent after the Indian Ocean tsunami of 2004,trawlers seen perched atop gutted banks.

But how long can the West focus on devastated fishing villages? Absent a middle class connection, loss struggles for gut bearings and is replaced by regret for the dead — hundreds of thousands again — in a far, far away place. It’s abstract.

But this blisteringly hot summer had seemingly tumbled into a coma. Only August could rescue it. Only August could refocus the camera and elicit the visual phrasing modern media craves as comfort food, inducing words like “epic,” “biblical,” “unprecedented,” “historic” – each one sincere if sincerity is a function of chaotic empathy and borrowed dread.

How to pass an epic-less summer was the question on everyone’s mind, until a blunderbuss storm called Harvey served up a watery tempest of Michelin caliber and sent reporters scurrying toward the latest victims, with news outlets immediately locked in mortal one-upmanship, disaster words as always struggling to keep pace with disaster images (hence the “unprecedented” monotone).

Foraging for a horrible but visually charismatic storm, August found one, cynically extricating itself from what was beginning to look like a thoroughly un-historic month. Out popped the sexiest of disaster sentences: “Everything is gone,” not once but endlessly. In her novel “Pond,” Claire-Louise Bennett, describes a fictional storm: “It was experienced; and it came back, and it came back again.”

Houston, meet the experienced Mr. Harvey. Now, before September digs in, the august journalists can start taking bets on the next doomed airliner, or begin coaxing nature into something even more superlatively awful, otherwise known as epic.