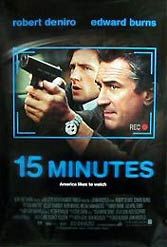 A movie that cues a conniving Czech killer who says “I Love America. No one is responsible for what they do…” while watching talk TV and looking up “low self-esteem” in a pocket dictionary plays gladly with fire.

Director John Herzfeld (a TV mainstay) torches the house and more in this spooky mess that moodily occupies the acres between “Network” and “After Hours.” To sum it up: two gangsters, the Czech (Karel Roden as Emil Slovak) and Russian (Oleg Taktarov as Oleg Razgul), arrive in New York City intent on recouping stashed cash from the old country. Predictably, the aliens turn illegal; unexpectedly, Oleg turns camera crazy.

Enter self-aggrandizing, celebrity detective Eddie Flemming (Robert De Niro) and good-guy fire marshal Jordy Warsaw (Edward Burns), lukewarm on their trail. Herzfeld can’t decide if he’s making a bracing noir or a Jerry Springer send-up that mocks the entertainment industry, image-making, and (of course) lawyers. The result is a wicked, wacky and mean pastiche — a hand-held movie-within-a-movie — that tosses “Frasier’s” Kelsey Grammer into the mix but never quite gets around to becoming a single entity. Taktarov as “filmmaker” Oleg (aka Frank Capra, intent on making “Silence of the Sheeps”) and Herzfeld’s dexterity in shifting between the comic and the sinister redeem an otherwise volatile failure. “Perception is reality,” Emil is told toward the end. Good to know.