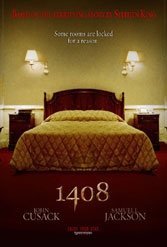 Mike Enslin (John Cusack) is a hack writer who writes about hotels that claim to have ghosts out of the cynicism of his jaded heart. He doesn’t believe a word of it. He’s separated, rude, with a bad-news past. He wears a cap with the words “Paranoia is total awareness.”

When he gets an anonymous postcard suggesting he not stay in room 1408 at New York’s Dolphin Hotel, he naturally checks in, or tries to. This against the strident warnings of manager Gerald Olin (Samuel L. Jackson), who, in elegant tones that merge Longfellow and Poe, warn him that 56 people have gone mad and died in said room. Most haven’t lasted an hour, let alone a night. “My training is as a manager and not as a corner,” he says.

But debunker Enslin gets his way, and into Stephen King land we go. Surprise, surprise, the room is possessed, and most of the film counts the ways. You know you’re in the remote badlands when a self-starter radio kicks on with The Carpenters’ “We’ve Only Just Begun.”

Olin is certainly right: 1408 is “one evil fucking room.” And since Enslin lives in California it’s fair to ask whether checking out ever really means leaving, especially when you have emotional baggage. That’s Håfström’s, and King’s, point, but the hand that rocks the cradle is far too heavy.