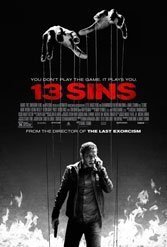 German director Daniel Stamm’s gruesome Faustian thriller opens with a jarring episode involving a severed finger and escalates zealously. Elliot (Mark Webber) is a timid New Orleans salesman with a pregnant fiancée, a cruel father, and a mentally disabled brother. He’s just been fired and is at wit’s end when he receives an anonymous call telling him that if he’s willing to “enter” a macabre game show-like contest and complete 13 tasks, all his financial and personal woes will vanish.

But what starts with swallowing flies and making children cry ramps up into darker, more cutthroat tasks. The horror here is in beholding the willingness of the escalation, “the spectacle of transformation,” says one character, “to show anyone can be turned into a monster.” And there’s monstrosity aplenty, as well as a cop called Chilcoat (all-jaw Ron Perlman), who somehow knows the game is at the root of all human conspiracies, the tool of capricious puppeteers who manipulate history itself. But evil is choice, not chance — and the greedy players are willing participants. Though Elliot eventually loses both gumption and glee, his reversal seems too little, too late.

Stamm handles all this enchanted grisliness with kid-in-a-sandbox conviction. That the “game” cell phone instruction comes via Broadway octogenarian George Coe’s ironically cheery voice and is cued up by Julius Fucik “Entry of the Gladiators” ring tone, the circus classic, gives the creepy goings-on an added punch.

The film is an English-language remake of Thai horror director Chukiat Sakveerakul’s 2006 “13 Beloved.”