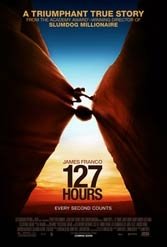 Midway into Danny Boyle’s slow-boil chiller, trapped hiker Aron Ralston (James Franco) tells his videocam how much he regrets not buying a Swiss Army Knife. “Lesson, don’t buy the cheap made-in-China multi-tool,” he tells his videocam. It’s gruesome mockery since it comes after the knockoff won’t hack off his wedged right forearm. Aron has slipped into Utah desert ravine while on a solitary weekend hike — he’s violated the buddy system and compounded the problem by telling no one of his destination — leaving his sanity in the hands of hour-to-hour ruminations, around which Boyle builds his movie.

Franco’s lost-to-the-world Aron is a vehicle for anyone who thinks they might be having a bad day, or week. As days morph into waterless eons, he manages to talk himself into comic relief composure, keeping the realties of urine sipping and self-maiming in check.

This isn’t so much an adventure film as a biography of endurance that uses deprivation-triggered hallucinations to propel the narrative. Black humor and irony are survival tools — Aron calls himself a “self-proclaimed American superhero” — giving his will to live feral and ferocious ammunition. Franco is superlative, let down only Boyle’s glad-handed excursions into mawkish, music-infused flashbacks.

The real story took place in April 2003 in Utah’s Canyonlands National Park, while Ralston’s chronicled in his 2004 book “Between a Rock and a Hard Place.” In all, he was trapped for five days and seven hours, hence the title.