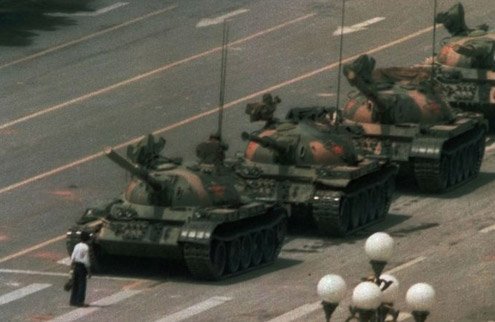 The image of a protestor halting tanks near Tiananmen Square in 1989 remains famous, but dissent is no longer "fashionable."
I

have never been to China. It is still to me a place of fables and walls inhabited by hundreds of millions of people whose anonymous totals swell into the billions when the newer sprawl yields to a rural whole that no language or ethnicity can claim as its own. Like Russia under communism, much of China is still remote enough to bypass the stricter familiarities of mapmaking.

I say this knowing that volume upon Western volume has expertly tried to frame the Chinese entity; outlining its girth; plumbing its people; and, to the extent possible, scouring the minds of economic sages worried about its potential reach.

China’s scope is incomparable. It sells but it also wants, and needs, and shops. By size, it is a consumer like no other before it. Cash is both cannon and fodder to acquire the ingredients necessary to make the copycat goods that enrage Europe — a Europe that can neither compete with nor live without industrial-strength outsourcing. The same dilemma also unsettles the United States, because the U.S. invented or refined many of the things China now mimics to peddle backwards to their source. It is capitalism’s perfect but paradoxical circle.

Increasingly, China also buys to satisfy its own multitudes, paupers mostly but many of them more recently middle class, and eager — ironically — to benefit from that which the West cannot impose on the East, or which the Chinese East rejects, the reign of standards, since standards are costly and China would lose some of its riches to their development and maintaining.

So China systematically acquires respected companies in what amounts to a bid to buy the skilful filtering systems it finds attractive but cannot and will not develop at home. These eclectic purchases and processes — in oil, pork, rubber, sewage treatment — predictably elicit further Western rumbling as vast (but often little-known) enterprises slip partially into Chinese hands, despotic ones despite the neon makeup worn by larger-than-life cities that are groomed to look like Western knockoffs but are similar in hubbub alone.

Such a contradictory framework circles back to a basic question: Will China explode, and if so, when?

Few great nations (including medieval China) have risen vertiginously without later suffering a kind of cultural stroke, a circulatory reckoning. In the West, that reckoning was first a fistfight with monarchies and later an enlightened response to the gaps produced by the industrial age. Resentment produced ideologies and movements, revolution and war. Zealotry made for both progressive and reactionary follies. In Russia serfs stopped being serfs, at least in name, and the British Empire, champion of a once sacrosanct class system, fell afoul of cabals, coteries, and unions. Workers popularized themselves into powerful factions. The destitute created a fiction of harmony both egalitarian and despotic, propelling an individual sense of right and wrong, destiny in the bargain. Europe was rattled, as was the United States, until so many collective national seizures evolved into two “ordering” and terrible wars, the latter humbling Germany and Japan and gradually giving the impulses of militarism an economic imprint only.

Postwar China instead herded itself into idiosyncratic communism that hissed at most intrusion and endured as such until the mid-1980s. The country’s newer, more open-minded look is still only two decades old. Internal fraying remains hidden, fragmented, ostracized. Distant ethnicities revolt, strikes are held, bombs explode, but the substance of Western-style spasms rarely seep past symphonic censorship. China remains at once available but closed. Its experts, Sinologists and sundry China watchers, dig through the entrails of Communist Party politics but still struggle for coherent insight into a system and a way of thinking that remains judiciously non-individual, a world view that has always confounded the vainer West.

Yet the same question persists.

How can arguably the world’s most ambitious and competitive nation, and its largest in size, evolve in the manner of similar behemoths without at some juncture suffering an upheaval, call it a hiccup or a belch, a moment in which the concealed disparities between itself and the more balanced entities it has overhauled come due and as such intolerable to a portion of its population — perhaps students or residents of rebel region, or both, or more? How can it groom an urban middle class that finds Western individualism attractive without that same individualism eventually creeping in to challenge, if not wreck, a governmental monolith that tolerates only those willing to play by the rules (allowing corruption but not ideology as a challenge)? Can the narcotic acquiring of wealth and domestic video distraction offset the controls placed on both? Can the eastern version of 19th-century-style alienation, when it develops (and it will), smolder without igniting?

New age “consumer” communism slides along the tip of this blade.

Though China has many purges in its recent past it has yet to pass through a period of public enlightenment, nor endure the conflict and hopeful agitation that goes with it. It can be a period against which neither cash reserves nor investment capital offer adequate relief.

Still new to the modern, China has yet to inhabit anything but the façade of civil life, which at its messiest is reckless, carnal, and entertained by dissent. That makes China’s dominant future the least foreseeable of sure things.