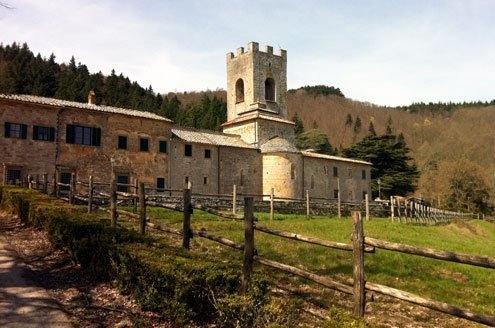 The Badia a Coltibuono abbey. Photos by Eleanor Shannon.
L

ong before I studied wine and food pairings in my sommelier course, I learned that grilled beef goes perfectly with wine made from sangiovese grapes. A decade ago, I took my three children and then-husband to a vineyard in Chianti Classico, near the Tuscan town of Greve. After more than an hour of relentlessly curving, unpaved roads, everyone in the car had two questions: Did I know where I going and did vineyard really serve lunch?

I wasn’t sure of anything, but I did find it. Lucky for me, and for us, since the afternoon delighted the senses. The two-hour meal featured grilled fiorentina steak and glass upon glass of Chianti Classico. The smell of smoke, the hum of tractors, the taste of succulent beef, and the vibrant colors of trees and flowers in warm spring bloom left an indelible imprint.

This spring, I returned to the heart of Chianti Classico looking for wines for summer grilling. My first stop was Gaiole, site of the 11th-century Badia a Coltibuono abbey, where Benedictine monks once focused on farming (“badia” is dialect for “abbazia,” which means “abbey,” while “coltibuono” means “good harvesting.”). I arrived on a grey and blustery evening half-expecting a medieval monk to open the heavy wooden door and show me from the courtyard to my bed-and-breakfast room. But the monks are long gone.

The next day I met Roberto Stucchi, a tall, slim, articulate member of the aristocratic Stucchi Prinetti family that has owned the abbey since 1846. He studied winemaking in California and applied what he learned to the estate, which began organic cultivation in 1995 and went all-organic in 2000. Climate helps, he told me, as does diversity. “We have woods, pastures, and vineyards, rather than just cultivating grapes alone.”

The simplest of the group is Chianti Classico, with the others gradually becoming more complex, structured and longer-aging. They’re what I think of as “cheerful” wines, with a lovely scent of violets and red berries, balanced taste, and enough tannins to act as a perfect foil for grilled steak. Most are priced in the €12-20 range.

The next day, I visited Martino Manetti of Montevertine in Radda di Chianti. His father Sergio bought the land in the late 1960s, transforming a stable into a cantina. He began selling wine in 1971 and made his name through Le Pergole Torte IGT, made from 100 percent sangiovese grapes. When the Manetti family started out, laws governing the production of Chianti Classico DOCG banned mixing sangiovese with any other grape — DOCG, or Denominazione di Origine Controllata e Garantita, is the highest Italian wine appellation. Though the laws have since changed, the family never joined the Chianti Classico Consortium or produced a DOCG.

Not that they needed to.

Manetti’s all-organic vineyard is located directly behind his house. He runs it together with a few other workers, managing everything, including the annual selection of the Le Pergole Torte label, a woman’s portrait. Making an elegant wine, he told me, is “simple but not easy.”

I then went to the Fontodi winery, which since 1968 has been owned by a different Manetti family, this one famous for handmade terracotta tiles. Fotondi, near the town of Panzano, is far larger than Montevertine. It has a busy office, dozens of employees, and a large and modern “gravitational flow” production area. A new cellar is being built.

Fontodi went organic in 1998. Sangiovese-based Fontodi Chianti Classico DOCG 2007, a traditional Chianti, sells for €12 -14, while Chianti Classico Riserva Vigna Del Sorbo 2007 made from a selection of the estates oldest vines, 90 percent sangiovese and 10 percent cabernet sauvignon is a denser, more concentrated wine that runs between €25-30. The estate’s Super Tuscan, all sangiovese, is Fontodi Flaccianello Della Pieve 2007. It must age 8-to-10 years before drinking and sells for €45-50.

Next step, fire up the grill.