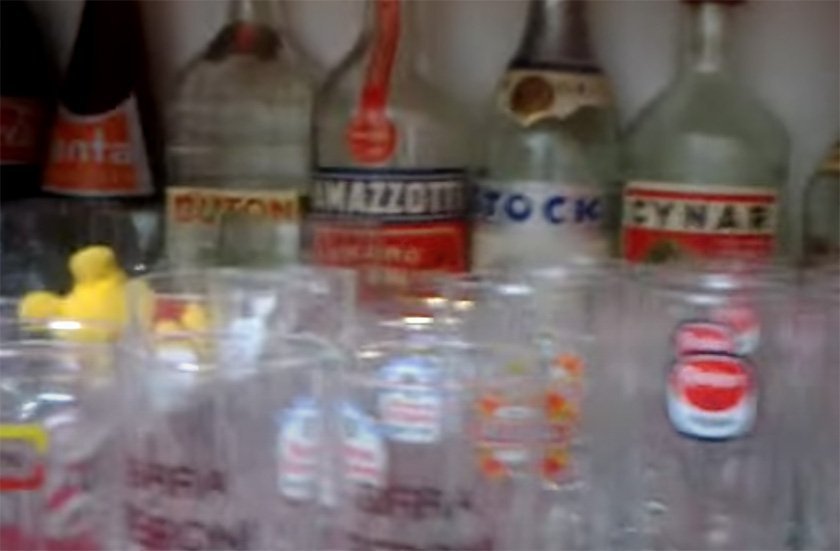 Back, fuzzily, to another era of Italian bar-dom.
F

or a good long time, I have been fascinated with old photos of Milan that I’ve found on the internet. My favorites show the city when it was the “little Venice” and Via del Senato, where I once lived, and Via Melchiorre Gioa were still canals. On the web one thing always leads to another, so I receive a steady diet of old pictures from all over Italy. One day a video popped up.

It was called 10 minuti dentro un bar anni ‘70 (“Ten minutes inside a bar, 1970s”) and amounts to a filmed tour of a Rome apartment that someone lovingly furnished with the kind of daily stuff that you see all the time but never remember — until an artifact like this video turns up.

Calling the video amateur would be a compliment. The focus is both fuzzy and shaky. But that hasn’t deterred me from spending countless 10-minute sessions wallowing in nostalgia for Italy, courtesy of this parade of kitsch.

Bars of this kind provide the fuel — caffeine and brief chatter — that keep a country’s life humming.

The bar is not the chic Caffe Greco — like a place nestled on a high-fashion street. Nor is it like the much-beloved Marchesi in Milan, to which Americans flock. This is the neighborhood bar, the generic “Bar Sport” found in few blocks in Italian cities. It is what almost all Italian bars were like before the international scrutiny that came with Italy hosting the 1990 World Cup. The high-profile event made bar owners self-conscious about style. No one who worked in the bar in my video ever made foamy heart swirls atop the cappuccino. There was no barista. The owner or the ragazzo made coffee. This particular bar had about as much atmosphere as a gas station, to say nothing of the decorating theme (ads mostly). Bars of this kind provide the fuel — caffeine and brief chatter — that keep a country’s life humming. No less, no more.

The video tour of this vital organ of Italian life begins with the auspicious clatter of a beaded plastic curtain. The wobbly camera then leads you slowly among the red Formica tables and woven acrylic chairs. There’s a cash register with an open drawer of old Italian lire. Also on display is a red lollipop dispenser (“Chupa Chups”), a rotary telephone and its accompanying token machine. There are old newspapers, a wall of cigarette packets, plastic ashtrays (with advertising), neatly stacked espresso cups (more advertising), soft-porn calendars (still more advertising), sheaves of football-pool (Totocalcio) forms, and a shelf of multi-colored bottles of aperitivo liqueurs that only a people who love cough syrup as much as Italians could possibly drink for pleasure.

Some things you see in the bar are long gone, such as the pay phone, the pin-ball machine, the prices, and the presence of Kodak film. Some things have been replaced. Today, you fill out the football-pool tickets with a computer instead of a dull golf pencil. The person who used to shout into the pay phone — so everyone could hear — now shouts into a mobile phone (everyone still hears). Other things in the bar are eternal; the improbable liqueurs made from artichokes or eggs and the dark blue Sali e tabacchi sign, indicating that the bar sells government-taxed salt and tobacco.

A Milan bar would send me coffee and fresh orange juice when I was sick.

The bar lacks some essentials of the real thing. There is no television constantly broadcasting football or cheesy variety shows. There are no car radios on the bar, which in the 1970s people removed and carried to keep them from being stolen. The video does have a musical, a soundtrack of “The Hustle” and Olivia Newton-John’s “Magic.” However, we never hear the clink of cups, the whir of the orange juicer, or the sound of a token falling into the telephone. No one yells at new arrivals to shut the door against a draft or argues about how the Roma or Juventus or Milan fared in their latest game. Even the most professional video could not capture the potato chips or spilled sugar crunching underfoot. But the details are so vivid, you can almost smell the coffee, fresh oranges, and — back then — cigarettes.

The camera’s tour could be a tour of my life in Italy. There was a bar like this one in my husband’s hometown of Padua, which I hated. My husband would drag me there to see his high-school friends roar up in fancy cars to play cards, shove, and tease each other. I felt like an alien and useless object. It was better in Rome where I found my own 1970s bar, not far from the Spanish Steps.

I went there daily after working out to have a panino and an entire Ritter Sport chocolate bar (I was young and fresh from the gym). In a mountaintop version of the 1970s bar in Cortina— albeit it with Tyrolean decoration — friends and I took a midmorning break from skiing for cappuccino or ski wasser (lemon juice, seltzer, and raspberry syrup). In Milan, the owner of our corner bar always asked me tutto bene? (literally “everything okay?” but more like “how’s life?”). He knew my husband would go there to smoke and make extra-marital phone calls. Later, another Milan bar, which was in my building, would send me coffee and fresh orange juice when I was sick. They called my tiny dog “the lion” and cried when I said I was moving back to the U.S.

T.S. Eliot may have measured out his life in coffee spoons. I can measure mine in coffee bars.

Lately I have shared 10 minuti dentro un bar anni 70 with my Italian friends who are stuck at home for reasons the world has come to know by heart. They like it as much as I do.