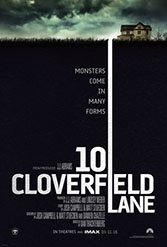 After Michelle (Mary Elizabeth Winstead) has a fight with her boyfriend, she decides to bolt. And off she goes driving into the Louisiana night — until she crashes and wakes to find herself shackled in a 1950s-style underground shelter, property of hulking Howard (John Goodman), a man-child who tells her she’s being held for her own safety — something monstrous has happened above.

What begins as a cat-and-mouse psychological thriller — potential pervert holds woman underground — slowly (if awkwardly) acquires momentum with the introduction of Emmett (John Gallagher Jr.), another apparent “hostage” who instead insists he’s there of his own volition. He saw weird lights and scampered for the safety of weird Howard’s bunker, which he helped build.

So then, is Howard a demented but harmless conspiracy theorist who believes in Russian attacks and aliens or is he a more-than-slightly unbalanced loner who imprisons people in his underground chamber? Is he a lunatic who spins doomsday yarn and shows off his decades of provisions (a jukebox and Tommy James included) or someone who’s dead serious when he tells skeptical Michelle, “You don’t know what’s out there…”

It is Goodman that makes director’s Dan Trachtenberg’s debut movie a memorable one. He’s polite in the most forced and terrifying of ways. His every overweight move, scowling and smothering, suggests a planet gone south. Even when the bunker-mates relax a bit, buying into his Armageddon story, never once does the menace relinquish its claustrophobic grip.

All will of course go awry, the guests growing too curious, and that’s when story dovetails with its fantastic end-of-days predecessor, “Cloverfield,” J.J. Abrahms’ found-footage 2008 movie about an alien attack.

Winstead is cast as a mix between a submissive yes-girl and a suddenly empowered Wonder Woman, a combination that makes a hash of just who she is, or might be. Gallagher’s Emmett is little more than a toss-in. But Trachtenberg keeps you guessing just long enough to keep the dark-skied kicker a small step ahead of the predictable. Now then, cue the apocalypse.